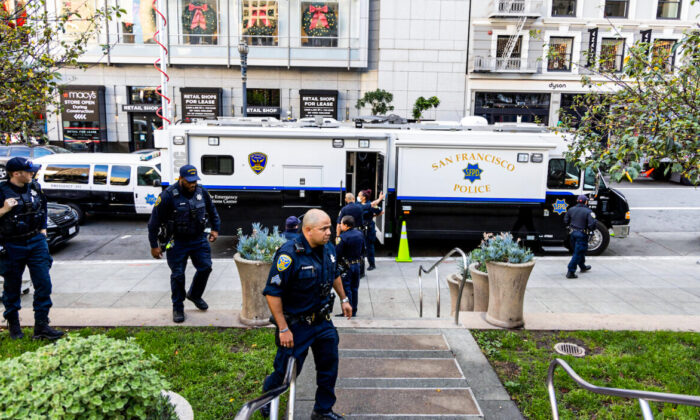 The new district attorney (DA) in San Francisco fired at least 15 employees from the prosecutor’s office after her left-wing predecessor, Chesa Boudin, was recalled last month.

“Today, I made difficult, but important changes to my management team and staff that will help advance my vision to restore a sense of safety in San Francisco by holding serious and repeat offenders accountable and implementing smart criminal justice reforms,” San Francisco DA Brooke Jenkins said in a statement about the firings. “I promised the public that I would restore accountability and consequences to the criminal justice system while advancing smart reforms responsibly.

“My new management team … with decades of prosecutorial experience at the highest levels, will help our office deliver on that promise. I have full faith and confidence that these women will promote and protect public safety while delivering justice in all of its various forms.”

Among those who were fired was former San Francisco Managing Attorney Arcelia Hurtado, who headed the city’s Innocence Commission. Hurtado expressed her disappointment on Twitter, invoking her ethnicity and sexual orientation.

“After over 2 years of tireless and devoted service to the City and [County] of SF, I was unceremoniously fired without cause via phone by the Mayor’s appointed DA,” she wrote. “I am the highest-ranking Latina/LGBTQ member of the management team at that office. I will continue the fight 4justice.”

Other staffers to lose their jobs at the district attorney’s office included Rachel Marshall and Simin Shamji, KRON-4 reported.

Boudin was recalled on June 7 amid criticism of a citywide surge in crime, homelessness, and drug usage in public. Jenkins quit Boudin’s office in 2021 after joining the DA’s office in 2014.

Last month, Boudin told the San Francisco Chronicle that he became a scapegoat for the spike in crime.

“A lot of my supporters and endorsements and donors and Democratic clubs that were behind me are urging me to run now or in 2023,” Boudin said. “I’m committed, as I always have been my entire life, to doing the work to support our communities, to fight for a fairer system of justice.”

Controversial billionaire investor George Soros’s network of left-wing organizations provided Boudin with $600,000 for his 2019 election, according to The Washington Times. However, after he was recalled, a spokesperson for Soros said he never contributed to Boudin.

“We disagree with any analysis that labels any prosecutor as a ‘Soros prosecutor’—each candidate stands on their own,” a spokesperson told The Washington Free Beacon. “Justice & Public Safety PAC, the political action committee through which Mr. Soros supports prosecutor candidates, has not supported—in the past or in the present, directly or indirectly—Boudin.”

But according to the Free Beacon report, Smart Justice California Action Fund donated about $180,000 to oppose Boudin’s recall. That group received funding from the California wing of the Justice & Public Safety PAC.