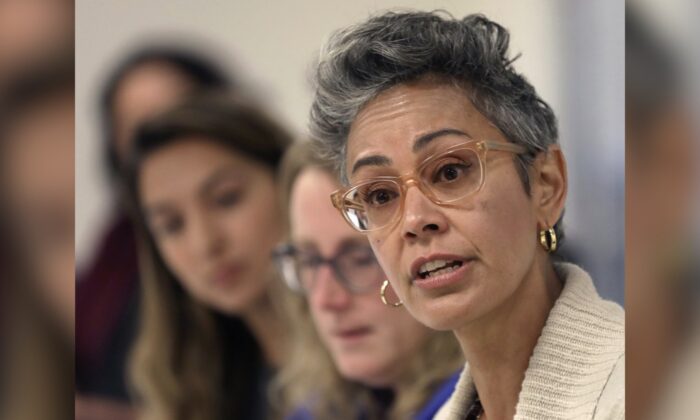 San Francisco voters on Feb. 15 overwhelmingly voted to recall three school board members, expressing their frustration with the board’s strict rules during the COVID-19 pandemic.

Alison Collins, Gabriela Lopez, and Faauuga Moliga were all recalled, with preliminary results showing at least 72 percent of voters opted to oust each one.

Lopez, the board’s president, Moliga, the board’s vice president, and Collins supported harsh measures during the pandemic. They stoked anger when they didn’t move to reopen schools and spent time on matters deemed frivolous, such as renaming school buildings.

“The impetus to it was really seeing that the school board seemed to deprioritize reopening, deprioritize a lot of things that mattered to students and parents, and instead was focused on doing a lot of things that were symbolic, that was more about politics and really not about anything to do with educating our kids,” Siva Raj, who helped lead the recall campaign, told The Epoch Times.

Moliga had told The Epoch Times that the effort was “motivated by politics” while Lopez asserted money funding the recall was being wasted because a general election is scheduled for later in 2022. On the eve of the vote, Collins shared social media posts exploring the backers of the campaign, which included billionaire Arthur Rock, who has typically donated to Democrats like House Speaker Nancy Pelosi (D-Calif.) in recent decades.

After the early results came in, Moliga said that “we fought hard and ran a great campaign,” thanking supporters and promising that there “are many more fights ahead of us.” Lopez said she’d run for a board seat in November.

San Francisco Mayor London Breed, a Democrat who clashed with the board over school reopening, said in a statement that voters “have delivered a clear message that the school board must focus on the essentials of delivering a well-run school system above all else.”

“Thank you for standing up for our kids when our elected leaders completely failed them,” the Recall SF School Board campaign said on Twitter.

Breed pushed for schools to reopen in early 2021, but the board resisted that push. Schools finally reopened in-person in August 2021.

Studies show virtual learning has led to inferior learning outcomes, including lower test scores, and critics of remote schooling have also linked it to a rise in mental health problems.

Breed will pick the replacements for the three ousted members.

Siyamak Khorrami contributed to this report.