9 San Diego Officials Walk out of Meeting After Votes Overruled 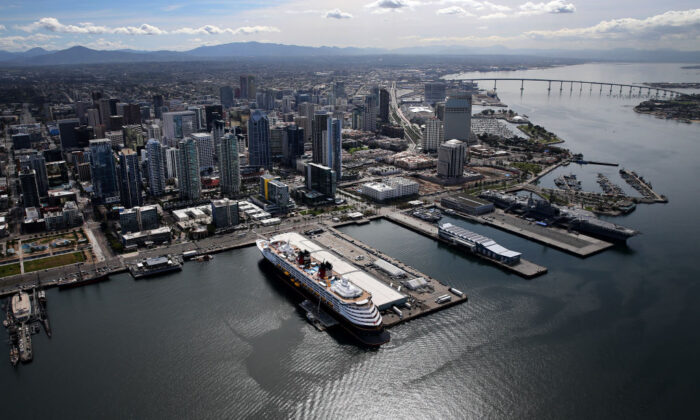 Aerial view of a cruise ship docked at B Street Pier in San Diego on March 20, 2020. (Sean M. Haffey/Getty Images)
By Mark Mathews

The San Diego Association of Governors (SANDAG) use of the weighted vote provision of its bylaws has drawn some criticism, as nine board members walked out of a Jan. 13 meeting in protest of the procedure.

Board members on Jan. 13 voted 10–9 to elect Del Mar Mayor Terry Gaasterland as its second vice chair. But then board member and San Diego County Supervisor Nora Vargas called for a weighted vote which overruled the majority, and San Diego City Council President Sean Elo-Rivera was chosen.

Each SANDAG board member has one vote, called a tally vote. However, for a so-called weighted vote, each also has votes based on the percentage of the population they represent.

According to the board’s bylaws, a tally vote is required to take final action on most items. In those cases, a simple majority of the voting members prevails. However, after such a vote, any two members may call for a weighted vote.

The board’s weighted vote on Jan. 13 passed by 77 percent, in spite of the nine members walking out in protest.

Santee Mayor John Minto, who walked out of the meeting, said in a statement after the decision, “Today was an extreme case, because I was told today, you don’t count. We don’t even want to hear from you, and so I had to say, if you don’t want to hear from me, then I have to leave.”

However, among those who support the weighted vote procedure was newly appointed Elo-Rivera, who said after the walkout, “This idea that the only way to achieve fairness is by throwing away the weighted vote is a fiction. Anyone who says that the City of San Diego should put the weighted vote aside is telling me that our residents matter less. This is about proportional representation.”