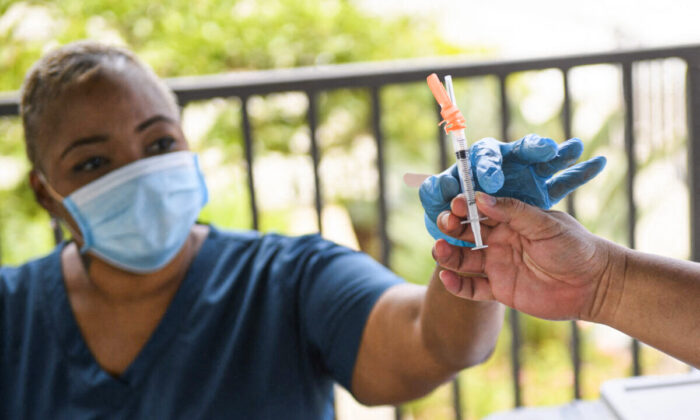 A nurse is handed a dose of the Pfizer COVID-19 vaccine before administering it to a college student at a mobile vaccination clinic at the California State University Long Beach campus in Calif., on Aug. 11, 2021. (Patrick T. Fallon/AFP via Getty Images)
By Mark Mathews

The San Diego Community College District terminated three employees—a professor, a counselor, and a lab technician—last week for refusing to be vaccinated against COVID-19, even though they had exemptions based on religious beliefs.

According to district officials, employees can be exempt from job-related requirements due to a disability or religious belief as long as they don’t impose an undue burden on the employer, based on the Americans with Disabilities Act and the California Fair Employment and Housing Act.

The officials, who didn’t elaborate on what undue burdens may have been present, did say that the “health and safety of the employee and others” was a key consideration.

The district had announced last June that students would no longer be required to be vaccinated against COVID-19 to attend classes in person, effective with the fall 2022 semester.

A district spokesperson explained the differences between requirements for students and staff, telling The Epoch Times in an email that students have more options in how they interact with others, including ways that don’t require in-person contact, while employees do not have that much discretion “in how and when they will interact with others,” and they “typically [work] onsite in close contact with others for much longer periods of time than students.”

Joanna Aud, one of the employees who was fired, said in an interview with local news outlet KUSI that her request for a reasonable accommodation was denied.

“I could be in [a] class as a student … No problem. But, I have been denied accommodation to prep that class alone in an empty classroom. So that’s an undue hardship? But it would be totally OK if I was a student.”

The district, according to officials, is reviewing at least seven other cases, which may also lead to termination.