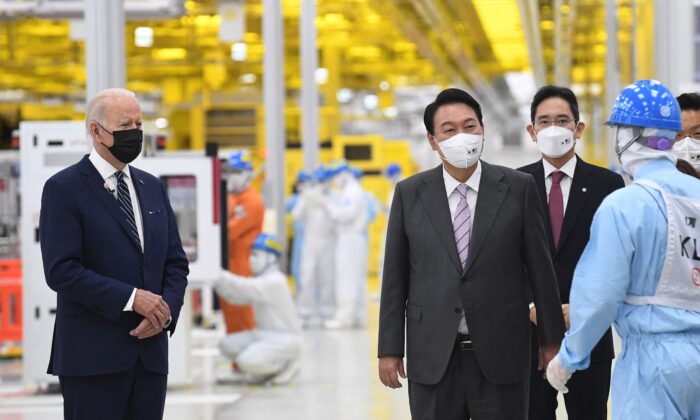 Samsung Electronics Co. will spend 450 trillion won (about $360 billion) over the next several years until 2026 to boost its businesses, from semiconductor chips to pharmaceutical drugs.

The investment is expected to drive long-term growth in strategic sectors like the chip industry. Samsung expects investments in the biopharmaceutical sector will help make it as successful as its chip venture, according to Reuters. In the May 24 announcement, the company revealed that roughly 80 percent of the investments will be made in South Korea, where it is headquartered.

In 2021, Samsung announced that it would invest $151 billion over the proceeding decade through 2030 in advanced chipmaking research. Much of the investment is expected to go into the semiconductor department, which is expanding rapidly as the company plans to take on leading chipmakers like Taiwan Semiconductor Manufacturing Co. (TSMC) and Intel Corp.

President Joe Biden toured the Samsung Electronics Co. campus in South Korea during his May 20–24 trip to Asia. He thanked the company for the $17 billion investment committed to manufacturing chips in Texas. The investment will create 3,000 new “high-tech jobs” in the state, Biden said in his remarks after touring the site.

Foundries have already raised prices by 10 to 20 percent in the past year, Peter Hanbury, a semiconductor analyst, told CNBC. Foundries are raising prices because they can, and also due to the fact that it has now become very expensive for them to fund the expansion of operations.

“We expect a further round of price increases this year, but smaller (i.e. 5–7 percent),” Hanbury said. “The chemicals used in [chip] manufacturing have increased 10–20 percent. … Similarly, the labor required to build new semiconductor facilities has also seen shortages and increased wage rates.”

The continued shortages of semiconductor chips allow manufacturers to “charge a premium” as customers continue “pushing to secure supply,” he added. Hanbury expects the shortage of certain chips to start easing only by the end of this year.

TSMC—the world’s largest chip manufacturer—raised prices by 20 percent in 2021. The company told clients to expect a price hike of 5 to 8 percent from 2023. Another Taiwan-based chipmaker, United Microelectronics Corp., is planning a 4 percent price hike during the second quarter of 2022.

Samsung is expecting sustained demand from data centers for high-margin memory chips during the second half of 2022. However, the company warned that component shortages will also likely continue. Samsung is the largest memory chip manufacturer in the world.

“However, there are still some parts supply issues, which could lead to disruptions,” Jin-man said. “We’re going to monitor demand fluctuations very closely and intend to provide supply that fits the demand.”