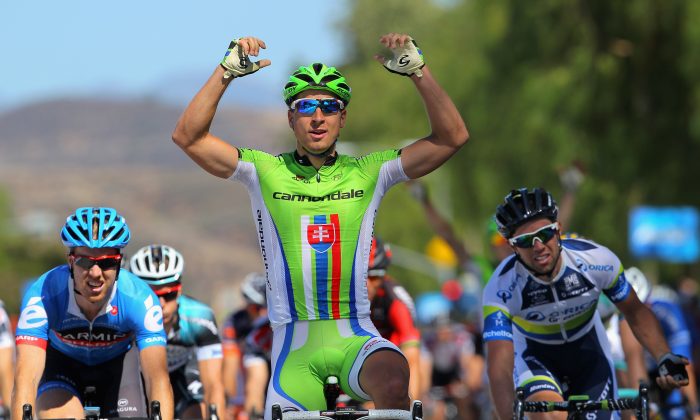 Stage winner Peter Sagan of Cannondale celebrates as he finishes ahead of Michael Matthews of Orica Green Edge in second place and Tyler Farrar of Garmin-Sharp to win Stage Three of the 2013 Amgen Tour of California from Palmdale to Santa Clarita on May 14. (Doug Pensinger/Getty Images)
Cycling

Sagan Wins Stage Three of the Amgen Tour of California

Peter Sagan showed his unmatched ability in winning Stage Three of the 2013 2013 Amgen Tour of California. The 23-year-old Cannondale rider had enough left in his legs after climbing four Cat Four hills in the 177-km stage to win the final sprint despite getting boxed in two hundred meters from the finish line.

Sagan had to cut halfway across the road while his rivals were sprinting a top speed; once he had a clear line, the young Slovakian champion accelerated past Michael Matthews of Orica-GreenEdge, who had been perfectly delivered by his leadout.

Sagan looked like he was jet-propelled, he shot forward so quickly to catch and overtake the Australian rider; Sagan had just of a half-a-length‘s lead at the line.

“Ted [King] did very good work, he pulled on the front all day and he took me to the front on the last kilometer, and the last 500m after Boivin was the last man,” Sagan told Cyclingnews.com.

I had a little bit of luck because of the headwind, so it was better to start the sprint later.

“I’m happy I could win here another time,” Sagan continued. “I like California and I think the people like me. I’m here for my fans, but I want to dedicate this victory to my teammate Mauro da Dalto who was very bad yesterday with heat attack and was taken to the hospital. I was happy I could take this victory for him.”

It was the Cannondale rider’s ninth Tour of Californian stage win in three years; he won three in 2011 ans five in 2012.

Michael Matthews, who looked to have the win in the bag until Sagan came from nowhere in the final five meters, was glad to have held on to second.

“I wouldn’t have been in the top three without the perfect leadout from my whole team,” Matthews said. “I think we got the result we deserved. Sagan was just a little too fast in the finish.”

Third went to Garmin-Sharp’s Tyler Farrar, who tried to follow Sagan’s wheel but also got boxed in and couldn’t get by in time to take the win. “I felt good,” Farrar said. “I think if I ride a little smarter sprint, I think I have the speed to beat [Sagan].”

Stage Three, 1778 km from Palmdale to Santa Clarita, offered a welcome break to the searing heat of the first two stages. The mercury stayed at a comfortable 85 degrees, which made the day’s four Cat Four climbs much more pleasant.

A group of about 20 riders attacked early in the stage, but couldn’t stay away. Four riders from that break: Andy Schleck (RadioShack Leopard,) Lieuwe Westra (Vacansoleil-DCM,) Chad Beyer (Champion System,) and Gavin Mannion, got away just after the first climb, and stayed away until 16.5 km from the finish line.

Chad Beyers pressed on for another three kilometers, but he couldn’t outpace the peloton, which was intent on a bunch sprint.

RadioShack’s Markel Irrizar attacked 5.9 km from the line, but Garmin-Sharp, hoping to deliver Tyler Farrar for the win, chased down Irizar in 1500 meter, setting up a the run-in to the finish.

In the final three kilometers, Saxo-Tinkoff, Orica-GreenEdge, Garmin-Sharp, and United Healthcare all fought Cannondale for supremacy.

Saxo-Tinkoff took the head first, with Cannondale right behind. BMC surged past 1100 meters from the line, then United healthcare took over 200 meters later. Orica-GreenEdge came down the right to deliver their sprinter Michael Matthews, while the rest of the leadouts swamped each other.

After the four climbs, Sagan had the best legs of the sprinters. He got boxed in but still had the speed to maneuver for a tiny opening and make his sprint. Tyler Farrar tried to follow but the gap was too small and Sagan too fast.