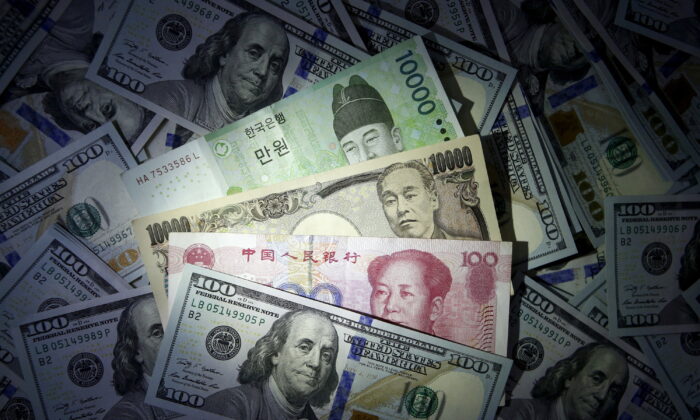 LONDON—The euro flattened on Monday, staying near a five-year low against the U.S. dollar, as investors sought safety in the greenback amid worries about slowing global growth.

The war in Ukraine and its economic fallout, in particular soaring food and energy inflation, has been a major drag on the euro, which has weakened more than 8 percent against the dollar this year. The difference between the European Central Bank and the U.S. Federal Reserve response to higher inflation has also weighed on the euro.

Data on Friday showed eurozone inflation surging to another record, adding to the case for the ECB to raise interest rates this month.

Jeremy Stretch, head of G10 FX strategy at CIBC said he expected headwinds on the euro to persist as the ECB is set to hike rates on July 21 by “a mere 25 basis point.”

Global recession fears have kept the dollar elevated even if markets have scaled back their U.S. rate hike expectations. The market is pricing in around an 85 percent chance of another hike of 75 basis points this month and rates at 3.25 percent to 3.5 percent by year end—before cuts in 2023.

Trade is likely to be light ahead of Monday’s Independence Day holiday in the United States.

The Australian and New Zealand dollars, as well as the Swedish crown, hit two-year lows on Friday and were not far from those levels on Monday.

“The Aussie and other commodity currencies and even euro and sterling will likely decline even more into the week, given markets currently are super-focused on the risk of a sharp slowdown in the global economy,” said Carol Kong, a currency strategist at the Commonwealth Bank of Australia in Sydney.

Looking ahead to the rest of the week, investors are awaiting publication of minutes from last month’s Fed meeting on Wednesday and U.S. employment data on Friday.

Australia’s central bank will meet on Tuesday and markets have priced in a 40 basis point (bp) rise in interest rates. The Aussie may not catch much of a boost if a hike of that size, or thereabouts, is delivered.