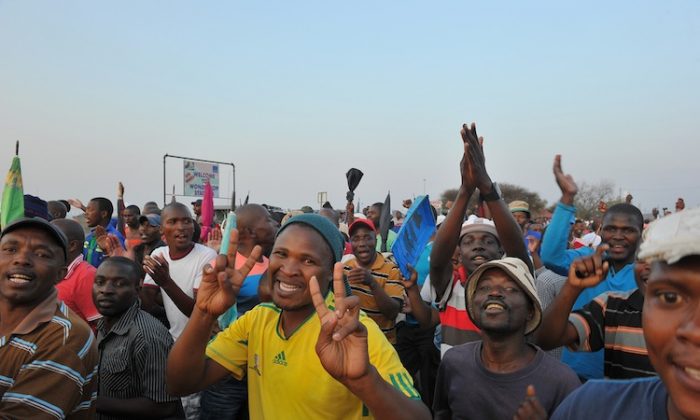 A man flashes the victory sign after striking miners secured a 22-percent pay hike from Lonmin platinum mine in Marikana on Sept. 18. The miners will resume work on Thursday, Sept. 20. (Alexander Joe/AFP/GettyImages)
Africa

A mediator between striking workers and a South African mine said the miners have accepted an agreement to return to work on Thursday.

Around 5,000 workers gathered at a nearby stadium to review and decide on Lonmin’s offer. The crowd cheered when the offer was finally accepted, reported AP.

The Lonmin platinum mine will give the workers a 22-percent pay increase and a bonus of $250 to cover the weeks the striking miners did not work.

The workers have been on strike for more than five weeks, asking for a pay raise. In mid-August, police shot and killed 34 strikers near the Marikana mine, while 11 others were killed in separate clashes along the way.

The strikes at the Marikana mine and other mines cost South Africa nearly 4.5 billion rand (around $563 million) in lost gold and platinum production, President Jacob Zuma said Monday, according to the Times Live publication.

The strikes in 2012 have drained 3.1 billion rand ($388 million) from the South African treasury.

“We cannot afford to go into a recession and revert to the 2008 and 2009 period [when] the country lost close to a million jobs, [from] which we are still battling to recover,” Zuma said.