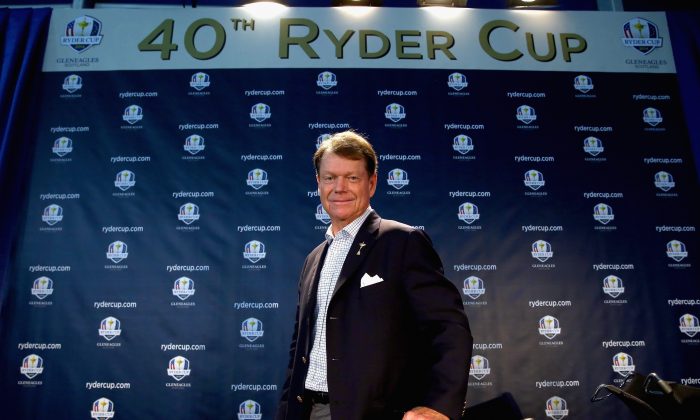 Ryder Cup captain Tom Watson, in this Aug. 11, 2014 photo, has made his three captain picks. Will it be enough to beat the European team? (Andy Lyons/Getty Images)
Golf

Mahan and Bradley are Easy Calls; Less so With Simpson
By M. James Ward

New York, NY—American Ryder Cup Captain Tom Watson said he waited until Monday morning to make his final captain’s choice in selecting Webb Simpson. The 2012 US Open champion played well at last week’s Deutsche Bank event but the real story was the absence of Chris Kirk from being selected—the 29-year-old Georgian won for the second time this PGA Tour season and did so by clearly outplaying the world’s number one player Rory McIlroy, shooting 130 to 134 respectively on the weekend when paired together.

Did Watson overplay the “experience” card as past American captains have and abandon the “form” component he had stated would play a major factor in his final choices for the USA squad ?

Leaving Kirk on the sidelines clearly seemed to suggest so.

In addition, Kirk is also ahead of Simpson on overall world rankings and FedEx points. His recent win—in convincing manner—last week against McIlroy in the greater Boston area when paired head-to-head for the final two rounds will now be reviewed when the actual matches are played at the end of this month at Gleneagles in Scotland.

Simpson does have team experience having played in the 2012 event at Medinah and playing well in the team events partnering with Bubba Watson for a 2–1 record. But Simpson, like a number of other American players, on the final singles day matches lost his.

Choosing Kirk would have meant having four rookies on the American squad but frankly why should that matter given how well the veterans from the USA side from past Ryder Cup matches have fared.

The European side is favored—and for a number of good reasons. The word “redemption” was mentioned numerous times during the announcement event held at Studio 8H at 30 Rock in the heart of midtown Manhattan. Playing in Scotland and having to deal with the pro-Euro fans who will attend is just part of the scene the American squad will need to face and overcome. The weather in Scotland is always problematic and should the USA team get off to a slow start the pressure screws will surely tighten.

Experience is a great teacher, but players like Kirk have demonstrated the kind of talent and wherewithal to compete effectively. When you play alongside the world’s number-one and win convincingly you send a clear message to him and his other fellow Euro teammates. Captain Watson termed Kirk’s Deutsche Bank victory simply a “snapshot” in time. Frankly Tom should look back at his own career. How would he have reacted if someone defined his epic wins as being mere “snapshots” when defeating Jack Nicklaus?

The Ryder Cup is like no other golf event. The track record of recent American squads which have gone ahead with the “experience” angle have failed. Younger players without such “experience” may be a bit shot on that side of the argument but they are also not polluted with past efforts that have been woefully produced.

This week the FedEx Playoffs continue at the BMW event in the Denver area with the Tour Championship to follow in Atlanta. One can only wonder if Kirk will use as extra motivation to continue his fine play with equally solid efforts in both events. Being snubbed can sometimes propel people to work even harder by sending an equally clearer message that a wrong was done. Should Kirk win either event or garner the FedEx overall title, it’s very likely Watson will be asked again if he still believes Kirk’s efforts are merely a “snapshot.”

The final word will be played out at Gleneagles in just over three weeks. Redemption is the buzzword for the American players. Watson is the last American captain to have won on the other side of the pond—that win goes back to 1993. The bottom line for the American squad is whether they can gel together in the same manner as the Euros have routinely demonstrated. All of this seems elementary—for Mr. Watson the final tally in Scotland will be the ultimate barometer.