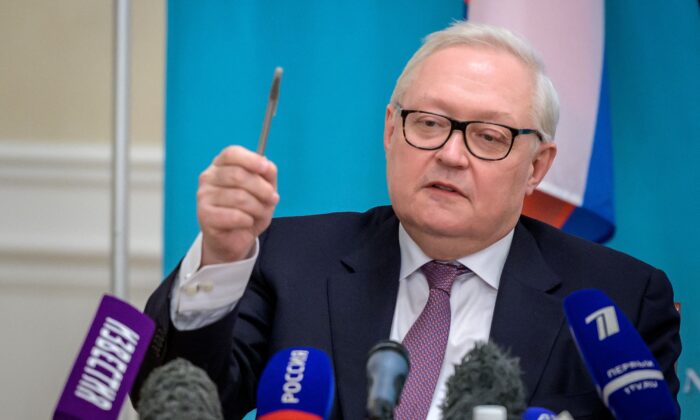 Russia’s deputy foreign minister on Monday reaffirmed that Moscow has no intention of invading Ukraine, but said receiving Western security guarantees is the categoric imperative for Moscow.

Sergei Ryabkov, who led the Russian delegation at the security talks with the U.S. in Geneva last week, claimed there was “no risk” of a large-scale war in Europe, rebuffing accusations of a possible Russian invasion of Ukraine.

Ryabkov spoke during a panel meeting at the Valdai discussion club in Moscow.

The talks in Geneva and a related NATO-Russia meeting in Brussels last week were held as Russia has amassed an estimated 100,000 troops near Ukraine in what the West fears might herald an invasion.

In a move that further beefs up forces near Ukraine, Russia has moved an unspecified number of troops from the country’s far east to its ally Belarus for major war games this month. Belarus shares a border with Ukraine.

Amid the soaring tensions, US Secretary of State Antony Blinken visited Ukraine on Wednesday to reassure it of Western support in the face of what he called “relentless” Russian aggression.

Russia has denied that it intends to attack its neighbor but demanded guarantees from the West that NATO will not expand to Ukraine or other former Soviet nations or place its troops and weapons there.

It also has urged NATO to roll back the deployments of its troops and weapons to Central and Eastern European nations that have joined the alliance after the end of the Cold War.

Washington and its allies firmly rejected Moscow’s demands but kept the door open to possible further talks on arms control and confidence-building measures intended to reduce the potential for hostilities.

Ryabkov emphasized that Russia wants legally binding guarantees from the West that NATO will not expand to Ukraine or other former Soviet nations or place its troops and weapons there.

“We see the threat of Ukraine becoming ever more integrated in NATO without even acquiring a formal status of a NATO member state,” Ryabkov said, pointing at Western powers supplying Ukraine with weapons, training its troops, and conducting joint drills.

“This is something that goes right to the center of Russia’s national security interests and we will do our utmost to reverse this situation, to rebalance this situation through diplomatic means,” he said.

Ryabkov suggested that the US could also take a unilateral obligation to never vote for NATO membership for Ukraine and other ex-Soviet nations.

Russia has urged the US and NATO to provide a quick written response, and Kremlin spokesman Dmitry Peskov told reporters Wednesday it expects to receive it “within days.”