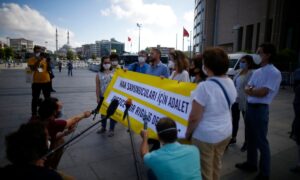 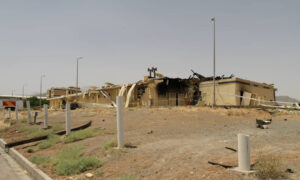 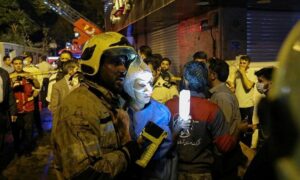 Just a few short weeks ago, U.S.–Russia relations were poised for a post-Soviet breakthrough that could have seen them join forces to target the ISIS terrorist group.

Now the United States has given up on talks with Russia aimed at ending the fighting in Syria. And Russia has suspended a long-standing deal to dispose of weapons-grade plutonium while simultaneously demanding the United States reduce its military presence in NATO countries.

The Kremlin has gone as far as demanding the United States cancel sanctions it imposed on Russia over its actions in Ukraine and even compensate Russia for losses from those sanctions.

While the White House has painted Russia’s efforts in Syria as a failure for not meeting Moscow’s stated goal of going after ISIS forces there, analysts note that Russia was always more focused on supporting its ally, Syrian leader Bashar al-Assad.

That support has seen Russia conduct airstrikes against rebels—and civilians—and position itself at the center of a conflict with global impact.

Some believe that has furthered Russian President Vladimir Putin’s ambition to reclaim his country’s position as a global power and challenge the hegemony the United States has largely held in the Middle East since the end of World War II.

The White House acknowledges there is no military solution in Syria, that force alone will not suffice. But with the total breakdown in talks, it looks like Russia, Syria, and Iran will continue with their current efforts to destroy rebel forces and bomb civilians into submission.

“It is immoral, it is unconscionable, and it is an outrage worthy of international condemnation, which Russia and Syria and Iran have all been on the receiving end of,” said White House Press Secretary Josh Earnest on Oct. 3.

But outcry over Russia’s current tactics does little to change the new reality. An end to the five-year civil war and a transition from the Assad regime will both require Russian cooperation.

It took months of hard bargaining for the United States and Russia to reach the cease-fire agreement that began on Sept. 9 and ended with 20 dead aid workers in rural Aleppo a week later.

Before the cease-fire was over, the U.S. mistakenly bombed Syrian government troops, whom it had confused for ISIS rebels.

The cease-fire was meant to give safe passage for the aid workers to provide food and medical supplies to civilian victims in besieged areas. While some aid was delivered, Russia and Syria also used the cease-fire to cement their recent gains.

If the agreement had held beyond the week, the United States and Russia were set to cooperate on strikes against ISIS and al-Qaeda affiliate Jabhat Fateh-al Sham—the first joint military action between the two nations since WWII.

Instead, it turned into the latest example of Russia and Syria’s indiscriminate bombing campaigns, which have targeted hospitals and other civilian facilities.

This indifference to bystanders has allowed them to attack their enemies without the restraints the United States has faced.

The United States has largely followed the rules, according to Drew Berquist, a counterterrorism expert for the U.S. intelligence community and founder of OpsLens, a website that provides daily commentary on national security issues.

Syrians, Russians, and even some U.S. allies like the Iraqis, have been less discerning.

“They’re not as polished with how they review targets, and they don’t look to the extent we do at collateral damage,” said Berquist.

For the United States, if collateral damage reaches a certain threshold, it’s a no-go “even if it’s a really good target,” he said.

“Syrians, with their backs pushed against the wall, aren’t going to look at that.”

The result is that Russia and Syria have been able to attack rebel forces with a grim determination the United States—which is determined to quell the deaths of civilians—cannot have in its attacks on ISIS.

While “the West is interested in ending the conflict because of the refugee flow into Europe and the mass killing,” according to former U.S. Ambassador William Courtney.

Russia has more immediate ambitions: to prop up an ally, protect its borders, and strut its military might.

Beyond the military support Russia has lent Assad, beginning with swooping in to save his regime from collapse in September 2015, Russia has also given the Syrian leader cover at the United Nations by using its veto power on the Security Council. Russia has thus proven its mettle as an ally, a fact other Middle Eastern nations have no doubt taken note of.

Syria is a vital last stand for Russia, according to Courtney. The Assad alliance is Russia’s last asset in the Middle East and provides a naval base in Tartus and an air base in Latakia from which Russia can still project power in the conflict.

However, some in the Middle East remain skeptical of Russian intentions. Assad is not popular among the region’s Sunni population, though he does have support from Shia-dominated Iran.

“Assad and his allies are pleased to see Russia involved, but most of the rest of the Middle East is not,” said Courtney.

Despite that, Russian arms sales in the region have increased, and even Gulf monarchies, traditionally U.S. allies, have turned to Moscow.

This shift has allowed Russian arms suppliers to challenge U.S. dominance in the region, said Nikolay Kozhanov, a Russian expert on Iran and the Middle East and a visiting lecturer at the European University at St. Petersburg.

“The instability in the Middle East suggests that the region will remain one of the chief markets for arms for years to come,” he said.

With the growing view that the United States is more focused on East Asia than the Middle East, Russia’s influence could increase. Nations in the Gulf, in particular, are looking for an alternative to the United States due to the perception that it is on its way out, said Kozhanov.

“This perception is very wrong but dominates in the region,” he said.

Russia’s activity in the Middle East is part of a broader ambition to reclaim its position as a great power. That status was lost when the Soviet Union collapsed in 1991, but under Putin, Russia has reemerged on the global stage.

In part, Russia’s recent offensives are motivated by insecurity—the fear that Russia is being surrounded by countries beyond its control and allied to the United States.

The NATO buildup in the former Soviet block, from the Baltic states down to Romania, has reinforced the widely held perception in Moscow that Russia is under threat on its borders.

Russia has historically faced invasion from the West, making the NATO presence there concerning, notes a Stratfor report.

“The only way for Russia to secure itself, as believed by Putin, is to become an important international player once again,” said Kozhanov.

Meanwhile, instability in the Middle East also presents a direct threat to Russia, which faced armed revolt in the predominantly Islamic republic of Chechnya, a federal republic in Russia’s North Caucasus region less than an 800-mile drive from Syria.

Keeping ISIS and other extremist groups out of Russian territory are important objectives for the country’s actions in Syria and the Middle East. Intervention in the Syrian war has won Putin domestic support and legitimacy as the protector of Russia’s external borders.

“It is quite important for the country’s leaders to ensure support from the population,” Kozhanov said.

“The view of Russia as a besieged fortress is something propagated by the Kremlin for its own needs and used for domestic mobilization.”

That narrative worked particularly well in Crimea, where Russia used the divided loyalties of the Ukrainian people, and the sizable Russian population there, to annex the peninsula and gain control over its key warm water port on the Sevastopol Bay.

Russia’s involvement in the Syrian conflict is deeply intertwined with its meddling in eastern Ukraine. The Kremlin uses the Syrian intervention as leverage to bring up other issues, like the sanctions brought against them for their actions in Ukraine, according to Goodrich.

“Russia has always been a country that ties everything into a bigger game,” she said.

According to the Institute for the Study of War, Russia can now use escalating levels of violence—and the harm it inflicts on non-combatants—to extract concessions in future negotiations over the Syrian civil war.

Russia likely would not have entered Syria if the fighting in Ukraine was more intense than skirmishes, however.

“The Russians see Ukraine and Syria as equally important and believe that they cannot afford fighting on two fronts. As a result, they are trying to settle one crisis [Ukraine] to handle the other,” said Kozhanov.

Both conflicts see Russia trying to reassert a position it held in the Soviet era, as a hegemonic influence over the countries on its immediate borders.

Syria has also given Russia an opportunity to deepen its military cooperation with another of the United States’ regional rivals—Iran.

“Russia and Iran share a resentment that America can block their expansive ambitions. So they seek each other’s support,” wrote Vali R. Nasr, dean of the Johns Hopkins School of Advanced International Studies, in a New York Times op-ed.

Nasr warned about “a Russian-Iranian military axis that could upset hopes for stability in the Middle East, and for containing Russia’s global ambitions, into the future.”

At the moment though, Putin’s ability to achieve greater Russian influence should not be overstated, said Kozhanov.

“Russia will definitely not replace the U.S. in the Middle East—they don’t have the capacity, political or economical, to do it,” said Kozhanov. “Their abilities are quite limited.”

Although Russia’s newfound expansionism is undeniable, on a larger scale its military power is severely limited compared to the United States, according to Kozhanov and Courtney. Russia simply does not have America’s ability to project power around the world.

“It can’t be a great power if it can project power only in its immediate neighborhood,” said Courtney.

Russia will, however, continue to play the role of a revisionist power, dissatisfied with an international system dominated by the United States.

And Putin’s calculated interventions will likely increase tensions between the two countries and prevent cooperation on other issues, like the war against ISIS.

The upcoming presidential election in the United States adds another unknown to the current competition.

“Russia has the perception, correct or not, that Secretary Clinton will be more hawkish than even President Obama has been. They’ve had experience with her and she’s known,” said Goodrich.

On the other hand, “Donald Trump is a wild card and unknown. Russia is worried about the unknown,” she added.