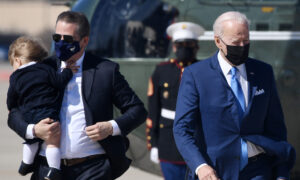 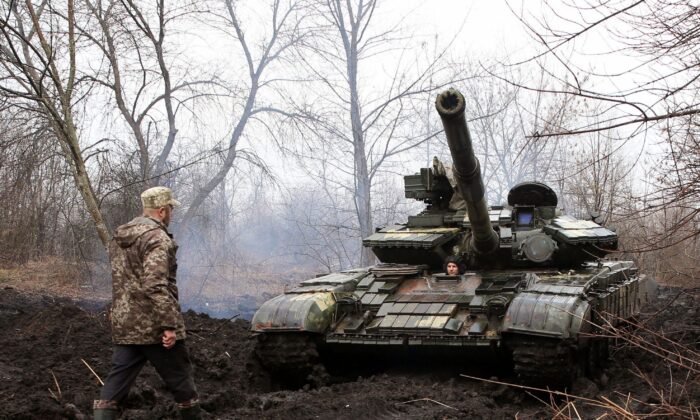 Ukrainian servicemen with their tank close to the front line of clashes with Russian-backed separatists near Lysychansk, Ukraine, on April 7, 2021. (STR/AFP via Getty Images)
Canada

There are a few ways to interpret the recent escalation of Russia’s military buildup in the border region with Ukraine, says Marcus Kolga, a senior fellow with the Macdonald-Laurier Institute.

“In the best-case scenario, Putin’s aggressive military buildup in Ukraine’s eastern border is an attempt to intimidate the Ukrainian government and President Zelensky and send a message to [U.S.] President Biden,” Kolga said in an interview.

“However, given the steep intensification of war propaganda in Russian state media, the multiple ceasefire violations along with the military buildup, it is entirely possible that Putin is preparing to invade and annex Donbas under the pretext of protecting Russian speakers in the region. As such, he will claim it is an internal Russian issue.”

In 2014, in a process that led to Putin’s controversial annexation of Crimea, Russia sent troops to the Ukrainian border under the guise of testing their military readiness. This sparked a conflict between Russian-backed separatists and the Ukrainian military, which has to date left 14,000 people dead.

Some in Ukraine are seeing parallels between this and the recent military buildup, The Globe and Mail reports, since the amassing of 85,000 at the border has been rationalized by the Kremlin as preparation for a training exercise.

The military escalation comes at a time of political turmoil within Russia. The poisoning and imprisonment of opposition leader Alexey Navalny was followed by large protests by Russian citizens and a crackdown by the Kremlin on Navalny’s allies. This coincides with a gradual decrease in the Kremlin’s popularity among Russians, which has also been cited as a reason for the protests. According to recent polls, approval of Putin has been on the wane, with his approval rating dropping to 59 percent last April, the lowest in a decade.

Kolga says that although Putin’s geopolitical objectives are a big part of his actions in Ukraine, the military escalation along the border should be also looked at “through the domestic Russian political lens.”

“Putin recently passed a constitutional amendment that would allow him to remain in power until 2036, yet his popularity in Russian polls is very low,” he says.

“In 2014, when Putin had similar low ratings, he attacked and annexed Crimea and his popularity rebounded. Putin may now be looking for a similar distraction ahead of what promises to be a busy spring protest season in Russia, with outrage about the poisoning and imprisonment of Navalny growing.”

The military buildup at the border has elicited condemnation from members of the Western alliance, including the United States and Germany, both of which have urged Putin to reduce the military presence.

In an NBC interview on April 11, U.S. Secretary of State Antony Blinken warned Moscow of “consequences” if it acts “aggressively and recklessly” in Ukraine.

In a call with Zelensky last week, Prime Minister Justin Trudeau expressed concern over what he called Putin’s “destabilizing actions” on the border and reaffirmed “Canada’s unwavering commitment to support Ukraine’s sovereignty, security, and territorial integrity.”

Zelensky has requested a talk with Putin about the situation, which has been ignored, according to news reports.

Dimitry Kozak, a top official in the Kremlin, has made statements to the effect that Russia may intervene on behalf of Russian-speaking residents in eastern Ukraine, amid the ongoing clashes between Russian-backed separatists and Ukrainian troops.

According to the BBC, Kozak described the situation the separatists face as possibly akin to the 1995 massacre of 8,000 Muslims that took place in the Bosnian town of Srebrenica, saying, “If, as our president says, there is a Srebrenica there, we shall probably have to come to their defence.” He also warned that if the situation escalated it could be the “beginning of the end” for Ukraine … “not a shot in the leg, but in the face.”

Putin’s assertiveness has also extended to Canada’s own backyard in the Arctic. Russia recently filed a submission to the UN Commission on the Limits of the Continental Shift to expand its claim to the Arctic Ocean seabed. If approved, Russia’s claim would extend to an area over which Canada has exclusive economic rights to fish, drill, and undertake other activities.

Russia has also grown its military presence in the Arctic in recent years, as the Kremlin increasingly sees the region as central to its foreign policy, with a new document on Arctic development ordered by Putin in March expected to be presented soon, according to Defense News.

Kolga notes that Russia’s co-ordination with communist China also poses a threat to Canadian interests in the Arctic.

“Over the past few years we have witnessed a massive militarization of the Russian Arctic, and a declaration last year that Russia would aggressively expand its Arctic claims,” he says. “Russian co-ordination with China is also a growing threat, as China ramps up its aggressive posturing towards Taiwan and seeks to expand into the Arctic region itself.”