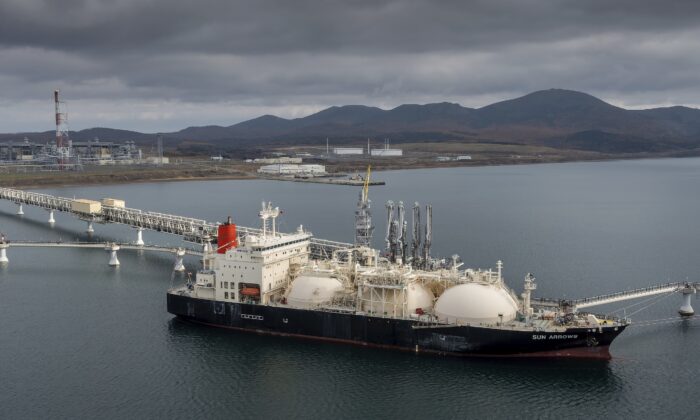 The tanker Sun Arrows loads its cargo of liquefied natural gas from the Sakhalin-2 project in the port of Prigorodnoye, Russia, on Oct. 29, 2021. (AP Photo)
Commodities

Russia’s natural gas production is projected to reach a record high in 2022, according to a new report by the International Energy Agency.

However, exports of natural gas have been slow to catch up with total production. Gazprom, which controls pipeline-gas exports from Russia, reported natural gas sales of just 185 billion cubic meters overseas last year, making for only the fourth-highest annual exports in a year that broke a new record for total production.

With an estimated 1,688 trillion cubic feet, Russia holds the world’s largest natural gas reserves, and this abundance of gas has allowed the country to maintain a high degree of energy independence while supplying one third of Europe’s natural gas supply.

One of the latest Russian efforts to expand its natural gas exports to Europe has been the Nord Stream pipelines, which deliver natural gas directly from Russia to Germany through the Baltic sea, bypassing intermediaries such as Ukraine and Belarus. The project was initiated despite the protestations of the United States, which feared that increasing gas exports to Europe would increase Russian hard power in the region.

Nord Stream 1 has been in operation since 2011, but Nord Stream 2 (which would double the project’s capacity) has been stuck in limbo since its completion in September of last year, as geopolitical factors have compelled Germany to hold off on inaugurating the pipeline. The inauguration of Nord Stream 2 has become a source of leverage in Russia’s recent tensions with NATO over Ukraine, with the inauguration of the pipeline being delayed by Germany as a result of pressure from the United States.

The timing is most unfortunate for Germany, which finds itself in the midst of a heating crisis in the middle of winter, as the country’s denuclearization has resulted in energy uncertainty for the Central European power. In the wake of the 2012 Fukushima nuclear power accident in Japan, German activists successfully lobbied the Merkel government to commit to a phasing out of nuclear power, which is on track to be completed this year.

However, the current gas scarcity has provoked remorse among some Germans, who now view the decision to denuclearize as shortsighted and counterproductive. Neighboring France has taken the opposite approach, with nuclear power providing over 70 percent of the nation’s energy supply. This emphasis has largely insulated France from the energy issues that now confront Germany.

With natural gas exports becoming the latest chess piece in the complex Russia-NATO tensions, projections for exports of the energy resource remain uncertain and contingent on geopolitical developments. Meanwhile, Russia’s natural gas extraction continues unabated at rates higher than any point in recent decades, with the nation’s massive reserves and a booming industry providing plenty for willing purchasers on international markets.