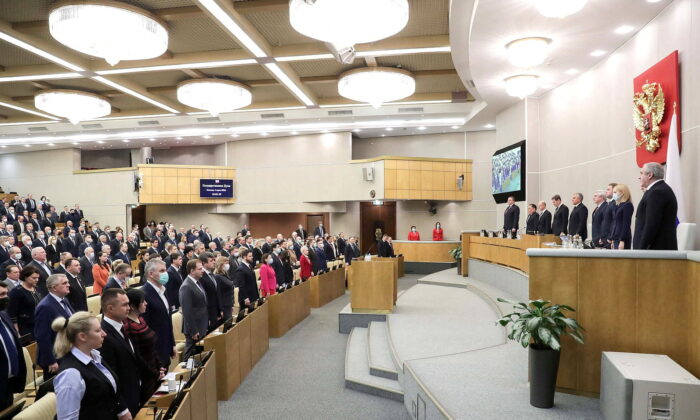 Russian lawmakers attend a session of the State Duma, the lower house of parliament, in Moscow, Russia on March 4, 2022. (Russian State Duma via Reuters)
Russia-Ukraine War

Russian lawmakers on March 4 passed a law that includes a jail term of up to 15 years for anyone convicted of spreading false information about the country’s military.

No lawmakers in either parliamentary chamber opposed the bill.

Vyacheslav Volodin, speaker of the Russian Duma, the country’s lower house of parliament, said it was necessary to “protect the armed forces” as companies, including U.S.-based ones, “are used as a weapon” by those “in the media space.”

The law amends Russia’s criminal code to make the spread of allegedly false information an offense punishable with fines or jail terms.

Lawmakers also imposed fines of up to $5,000 and a prison sentence of up to three years for public calls for sanctions against Russia.

The law was later approved by the parliament’s upper house.

“Huge propagandist-technological forces are against us. Therefore, we need laws. They are severe, but the time requires it. Security of our country, lives of our people, lives of or fraternal people are at stake,” Valentina Matvienko, speaker of the Russian Federation Council, said after the vote.

Russian President Vladimir Putin is expected to sign it soon.

“This means that by tomorrow, its rules will force those who lied and made statements discrediting our armed forces will bear very grave punishment. I want everyone to understand,” Volodin said.

Russia invaded Ukraine on Feb. 24 after Putin authorized a “special military operation” to “demilitarize and denazify” the neighboring nation, with one goal being protecting people in Donbas, which he declared independent from Ukraine. Conflict in Donbas between Ukrainian forces and separatist groups has been ongoing since 2014.

Russian officials don’t use certain words while talking about the war, including the word invasion, and assert that Western media have failed to report on what they cast as a genocide of Russian-speaking people in Ukraine.

Russia has recently taken action against some Russian outlets, including broadcaster TV Rain and radio station Echo of Moscow, forcing them to shut down over their reporting on the war.

The country also blocked access to the websites of the British Broadcasting Corporation (BBC) and Voice of America, a U.S. government-backed outlet.

After Russian lawmakers passed the new law, BBC Director-General Tim Davie said the outlet was suspending all coverage within Russia.

“The safety of our staff is paramount and we are not prepared to expose them to the risk of criminal prosecution simply for doing their jobs,” Davie said in a statement.

The legislation, he said, “appears to criminalize the process of independent journalism.”

The actions came after Russia Today, a state-backed outlet, shut down its operations in America after several platforms, including DIRECTV, stopped carrying it.