Russian Official Responds to US Senator’s Call to Assassinate Putin 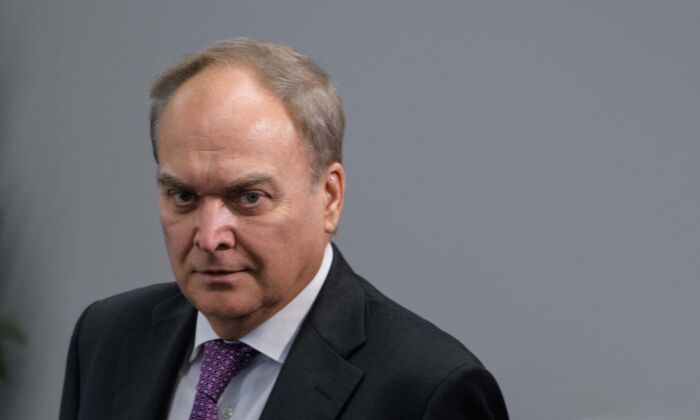 Anatoly Antonov, the Russian ambassador to the United States, arrives for an event in Washington in a file image. (Mandel Ngan/AFP via Getty Images)
By Zachary Stieber

Anatoly Antonov, the Russian ambassador to the United States, said the remarks were “irresponsible and dangerous.”

“The degree of Russophobia and hatred in the USA towards Russia is off the charts. It’s unbelievable that a country’s senator preaching his moral values as a ‘guiding star’ to all mankind could afford a call on terrorism as a way to achieve Washington’s goals on the international arena,” Antonov said in a statement released by the Russian embassy.

He also said that “It’s getting scary for the fate of the United States, which has such irresponsible and unprofessional politicians at the helm,” and demanded an official explanation and a decisive condemnation of U.S. Sen. Lindsey Graham’s (R-S.C.) comments.

Graham, a former Air Force lawyer, wrote on Twitter Thursday wondering if there was a “Brutus” in Russia, referring to Marcus Brutus, a Roman politician who assassinated Julius Caesar in ancient Rome.

“The only way this ends is for somebody in Russia to take this guy out. You would be doing your country—and the world—a great service,” Graham added. “The only people who can fix this are the Russian people. Easy to say, hard to do. Unless you want to live in darkness for the rest of your life, be isolated from the rest of the world in abject poverty, and live in darkness you need to step up to the plate.”

Graham also made similar comments during an appearance on Fox News and reiterated his position on Friday morning while on “Fox & Friends.”

The war could also end if Putin is charged with a war crime, Graham said, before calling for a person like an “Elliot Ness or a Wyatt Earp” to take action.

Ness helped take down gangster Al Capone while Earp was one of the law enforcement officers who killed outlaws in the 1800s.

Russian officials claimed the move was necessary to “demilitarize and denazify” the neighboring country, a claim widely derided by officials from other nations.

“Russia’s attack on Ukraine is a brutal, unprovoked invasion of a democracy, an ally, and a sovereign nation. It must not be allowed to stand, for it will create a precedent that unravels the international order that has kept the peace in Europe for nearly 80 years,” Sen. Rob Portman (R-Ohio) said on the Senate floor in Washington on March 1.