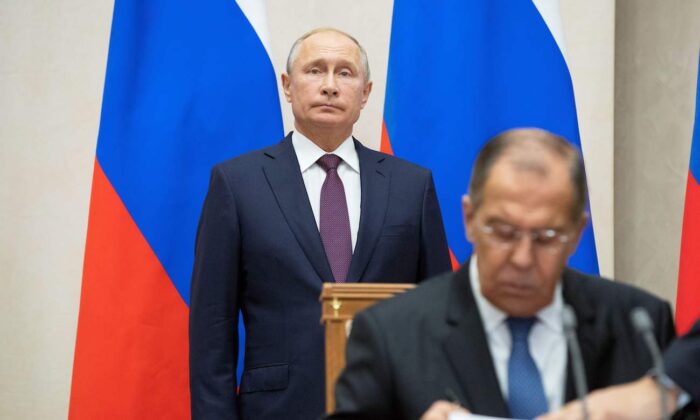 Russia’s foreign minister, Sergei Lavrov, warned Wednesday that a third world war would be “nuclear and destructive” amid his country’s invasion of Ukraine.

“The third world war will be nuclear and destructive … President Biden is an experienced man and has previously stated that the only alternative to war are sanctions,” Lavrov said in an interview with Al Jazeera’s Arabic channel, without elaborating, according to Gazeta, other Russian media, and Reuters.

Lavrov also alleged that Russia would be in “real danger” if Ukraine ever acquired nuclear weapons. There is no evidence that Ukraine was attempting to acquire nuclear weapons from the West, and Ukraine gave up its nukes in the early 1990s following the dissolution of the Soviet Union.

Earlier this week, the specter of nuclear war was raised when Russian President Vladimir Putin ordered his country’s strategic deterrence forces, which operates some of Russia’s nuclear arsenal, to be on a heightened state of alert. Some analysts remarked that the order was meant to intimidate the United States and NATO so as they don’t get involved in the Ukraine conflict.

Russia, like the United States, possesses thousands of nuclear weapons, but both countries over the years have stressed that nuclear war would lead to the annihilation of both sides, or the military doctrine known as mutually assured destruction.

Earlier this week, Biden was asked whether Americans should be worried about nuclear war. Biden responded, “No.”

“We are assessing President Putin’s directive. And at this time, we see no reason to change our own alert levels,” White House press secretary Jen Psaki told reporters on Monday, adding that the United States will not attempt to escalate the rhetoric after Putin’s comments and order. “We think provocative rhetoric like this regarding nuclear weapons is dangerous, adds to the risk of miscalculation, should be avoided, and we will not indulge in it,” she added.

On Thursday afternoon local time, Russia claimed its forces captured the southern Ukrainian city of Kherson, reported Reuters. However, Oleksiy Arestovych, an adviser to Ukrainian President Volodymyr Zelensky’s office, said that “the city has not fallen, our side continues to defend” amid ongoing fighting, highlighting the opposing claims of military victories on both sides of the conflict.

Ukraine’s State Emergency Service told The Associated Press on Wednesday that at least 2,000 civilians have been killed so far, although the number cannot be independently verified.

And Kharkiv, Ukraine’s second-largest city, with a population of about 1.5 million, came under heavy fire again Wednesday. At the same time, satellite photos from Maxar show a huge convoy of Russian tanks and other vehicles spanning miles outside Kyiv.

The International Atomic Energy Agency, the United Nations’ nuclear watchdog, said Russia had told the agency that its military had taken control around Ukraine’s largest nuclear power plant, but operations there were continuing normally.