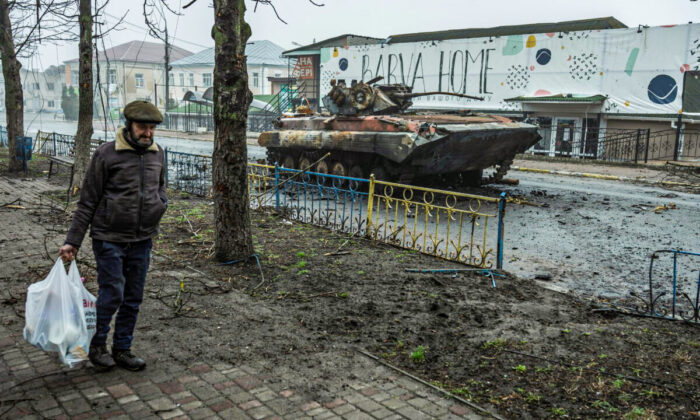 A local man walks past a damaged armored personal carrier, as Russia's attack on Ukraine continues, in the town of Makariv, in Kyiv region, Ukraine, on April 1, 2022. (Serhii Mykhalchuk/Reuters)
Russia-Ukraine War

“Irpin, Bucha, Gostomel, and the whole Kyiv region were liberated from the invader,” she wrote in a Facebook post.

Ukrainian President Volodymyr Zelenskyy said earlier in the day that Russian armed forces are withdrawing from northern Ukraine in a “slow but noticeable” mode and being accumulated in Donbas, a disputed area.

The U.K. Ministry of Defense confirmed that Ukrainian forces are retaking territory on the outskirts of Kyiv.

“Ukrainian forces continue to advance against withdrawing Russian forces in the vicinity of Kyiv. Along the northwestern axis, Ukrainian forces’ attempts to advance from Irpin towards Bucha and Hostomel are ongoing. Russian forces are reported to have withdrawn from Hostomel airport, which has been subject to fighting since the first day of the conflict. Along the eastern axis, Ukraine has retaken several villages,” read the intelligence update on Saturday.

The Kremlin announced early this week that their main goal for the invasion is Donbas, where the separatist republics of Luhansk and Donetsk are based, and Crimea, which was annexed by Russia from Ukraine in 2014.

The battle over Mariupol, a city in the east of Ukraine that connects Donbas and Crimea, shows no sign of alleviation.

Mariupol is a key target of Moscow’s military operation and has been subjected to extensive bombardment.

Seizing the city would let Russian forces secure a land bridge to Crimea and consolidate their grip along the Black Sea coast along southeastern Ukraine.

Mariupol has seen some of the worst suffering in the war. Around 100,000 people are believed to remain in the city, down from around 430,000 before the outbreak of hostilities. Weeks of bombardment and urban combat have led to severe shortages of water, food, fuel, and medicine.

Zelenskyy said in a video address early Saturday that a humanitarian corridor was operational in Zaporizhzhia, allowing for the evacuation of 3,071 residents from Mariupol.

Tens of thousands of people have been trapped in the besieged city, with scant access to food and water.

On a number of occasions, Russia and Ukraine have agreed to humanitarian corridors to facilitate the evacuation of civilians, but those efforts have often ended in failure, with both sides trading blame.

Russian President Vladimir Putin ordered a full-scale invasion of Ukraine on Feb. 24, which the Kremlin called “a special military operation.”

The United Nations said that as of April 1, 1,276 civilians have been killed and 1,981 injured in Ukraine since Russia’s invasion and over 4.1 million people have fled Ukraine.

It’s unclear if Ukraine’s western allies will change their positions once the Russian armed forces focus on southern Ukraine, as there have been long-term disputes between the two countries well before the invasion.

Zelenskyy accused Europe of being silent about the situation in Mariupol.

“Europe has no right to react in silence to what is happening in our Mariupol. The whole world must react to this humanitarian catastrophe,” he said.