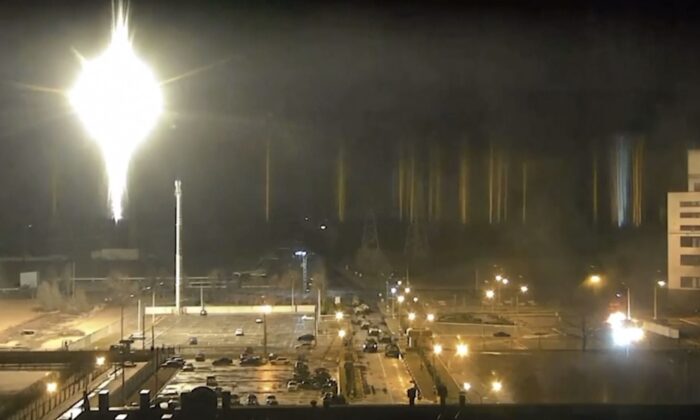 The plant is located in Enerhodar, a city on the Dnieper River. It houses six nuclear reactors and accounts for one-quarter of Ukraine’s power generation. Ukraine has four nuclear plants with a total of 15 reactors.

A statement posted Friday on the website of the State Nuclear Regulatory Inspectorate of Ukraine reads: “The Zaporizhzhia NPP site has been seized by the military forces of the Russian Federation.”

It said that Russian forces “committed shelling the Zaporizhzhia NPP site” on Friday, which caused a fire at the site. “The fire was extinguished by the Ukrainian State Emergency Service units. Information on the dead and injured is absent,” the statement said.

In an announcement Friday, the International Atomic Energy Agency (IAEA) said that Ukraine had informed the agency about Russian forces having taken over, but that “the nuclear power plant continued to be operated by its regular staff and there had been no release of radioactive material.”

“The safety systems of the plant’s six reactors had not been affected and there has been no release of radioactive material. Radiation monitoring systems at the site are fully functional,” according to the announcement. “However, the operator has reported that the situation remains very challenging and therefore it has not yet been possible to access the whole site to assess that all safety systems are fully functional.”

The statement continued, “Of the plant’s reactor units, Unit 1 is shut down for maintenance, Units 2 and 3 have undergone a controlled shut down, Unit 4 is operating at 60 percent power and Units 5 and 6 are being held ‘in reserve’ in low power mode.

IAEA Director General Rafael Mario Grossi said at a press conference later in Vienna, Austria, that two security people at the plant were injured due to the attack.

At an emergency U.N. Security Council meeting on Friday, Russian ambassador Vasily Nebenzya said that the power plant had already been seized by Russian forces on Feb. 28 and placed under guard of the Russian military to prevent other forces from “creating a nuclear provocation” or interrupting the power supply to civilians.

But Ukrainian saboteurs fired upon Russian forces patrolling the area on March 4 and set a fire, which was quickly extinguished, he said. He said no one was injured, the power units were not damaged and the facility continues to operate normally.

“A massive anti-Russia information campaign is unfolding,” he said, adding that Moscow has no interest in seeking a nuclear provocation of any kind, having also lived through the 1986 Chernobyl disaster, according to the U.N. report of the meeting. He said the security council meeting is another attempt by Ukrainian authorities to create “artificial hysteria” about the events in Ukraine.

U.S. Energy Secretary Jennifer Granholm had said on Twitter late Thursday local time that the reactors at the power station “are protected by robust containment structures and reactors are being safely shut down,” and that no elevated radiation readings near the facility were observed.

According to the Ukrainian nuclear inspectorate, if the nuclear fuel cannot cool down, it could have led to “significant radioactive releases into the environment.”

“[S]uch an event may exceed all previous accidents at nuclear power plants, including the Chornobyl [sic] accident and the accident at the Fukushima Daiichi nuclear power plant,” the nuclear inspectorate speculated. “It shall be reminded that in addition to six power units at the Zaporizhzhya NPP site, there is a spent nuclear fuel storage facility, damage of which due to shelling will also lead to radioactive releases.”

Update: This article was updated to include the version of events from Russia’s representative at the U.N. Security Council meeting on March 4.