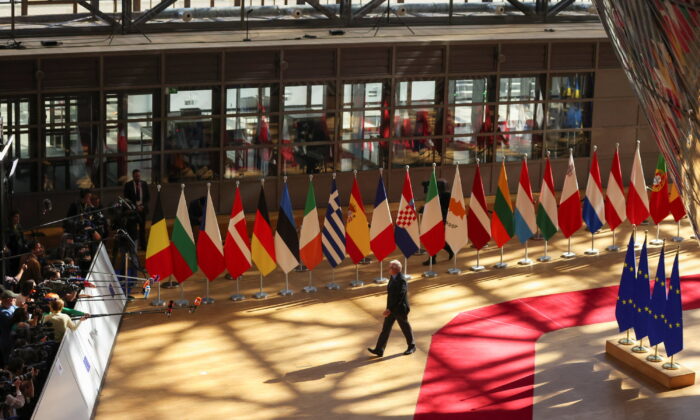 High Representative of the European Union for Foreign Affairs and Security Policy Josep Borrell arrives for the second day of a European Union leaders summit as EU leaders attempt to agree on Russian oil sanctions in response to Russia's invasion of Ukraine, in Brussels, Belgium, on May 31, 2022. (Johanna Geron/Reuters)
Viewpoints

Destroying the planet to save Ukraine

An early indication of the West’s loss of all perspective where Russia is concerned—call it Russia Derangement Syndrome—occurred in the United States after Donald Trump was elected president. Large swaths of the public, including virtually all Democrats and the legacy media, embraced a fantasy known as Russian Collusion, which asserted that Russia had colluded with the Trump campaign to install him as president. The fantasy persisted for three years until 2019, when Russian Collusion was confirmed to be a hoax perpetrated by Trump’s rival for the 2016 presidency, Hillary Clinton.

Earlier this year, after Russia invaded Ukraine over a territorial dispute, Russia Derangement Syndrome went into overdrive. An infuriated West sanctioned Russian goods and services helter-skelter without thinking through the consequences, chiefly those involving energy. Russia represents continental Europe’s chief energy source and is the main reason that Europeans can keep the lights on.

Only after the Europeans decided to punish Russia, and only after Russia announced cuts to gas flows—temporarily, it said—on the Nord Stream 1 pipeline of 60 percent, did it dawn on Europeans that Russia could retaliate this coming winter through punitively timed energy curtailments, putting Europe at Russia’s mercy.

In Germany, for example, Chancellor Olaf Scholz’s administration did the math to discover that under all scenarios, Germany lacked the reserves needed to last the winter.

“That was the sobering moment,” acknowledged Klaus Mueller, who heads Germany’s gas network regulator. “If we have a very, very cold winter, if we’re careless and far too generous with gas, then it won’t be pretty.”

The European Union, now in a panic, is scrambling to acquire fossil fuels from any sources in a desperate attempt to stockpile energy prior to winter. Germany is returning to coal, as are Austria, Italy, and the Netherlands. The United Kingdom is also turning to coal and reversing its ban on fracking and on North Sea oil production. The EU is endorsing Norway’s latest exploitation of the North Sea and is open to new contracts for long-term commitments of natural gas.

In this fossil fuel free-for-all, the West has effectively abandoned its once ironclad commitment to combat climate change, which its leaders never tired of describing as an existential threat to the planet. Gone is Germany’s net-zero commitment to phase out coal plants by 2030, tenuous is the UK’s pledge to stop using coal in power stations by 2024, and shaky is the G-7’s determination to end “direct public support for the international unabated fossil fuel energy sector by the end of 2022.” Instead, the G-7, noting its determination to support Ukraine, backed increased deliveries of liquefied natural gas and urged oil-producing nations to increase their production.

To punish Russia, the Europeans are knowingly visiting far more severe punishments on themselves. Germany is preparing to put its population on an emergency footing by urging the rationing of energy. Its governments are responding by dimming street lights, switching off the illumination of historic buildings, and shutting off hot water in gyms, museums, and government buildings. Housing complexes are limiting the hours that hot showers can be taken and lowering the thermostats in centrally heated complexes. Industries are planning to scale back, move away from Europe, or shut down operations altogether.

“A complete halt to Russian natural gas exports would cost Germany 12.7% of economic performance in the second half of 2022,” costing some $200 billion and affecting 5.6 million jobs, the Bavaria Industry Association warned last month.

A greater punishment still is being voiced in the form of nuclear war. The UK, France, and the United States have all reminded Russia that they possess nuclear weapons in response to Russian reminders that it has the greatest nuclear arsenal of all.

Remarkably, before the West so uniformly came to Ukraine’s defense, Ukraine was held in low regard by Europeans, viewed as a kleptocracy run by corrupt oligarchs with only the faintest hint of the rule of law. That image was transformed overnight once Russia invaded, as Ukraine became an instant darling of the West, so worthy as to warrant the destruction of the West’s economy, environment, and possibly the West itself. Such is the power of the Russia Derangement Syndrome.