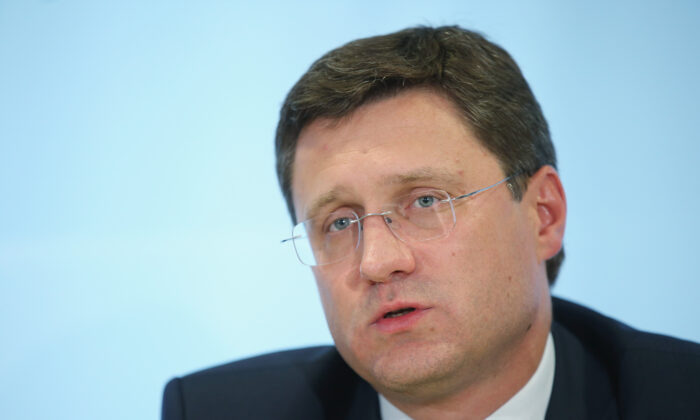 “In connection with unfounded accusations against Russia regarding the energy crisis in Europe and the imposition of a ban on Nord Stream 2, we have every right to take a matching decision and impose an embargo on gas pumping through the Nord Stream 1 gas pipeline,” Novak said in a statement broadcast on state television.

“But so far, we are not taking such a decision.”

The Nord Stream 1 pipeline, laid in 2011–2012, is 759 miles in length and is the longest undersea pipeline in the world. It supplies Europe with Russian natural gas, running through the Baltic Sea to northern Germany. It has a total annual capacity of about 55 billion cubic meters of gas.

Nord Stream 2, laid in 2018–2021, was expected to double the flow of Russian gas direct to Germany. The pipeline, worth $11 billion, was finished in September 2021. It was pending certification from Germany and the European Union, but Germany halted the project on Feb. 22, citing the escalating crisis in Ukraine at the time—after Russian Vladimir Putin moved to recognize the independence of two separatist-held region in Eastern Ukraine, challenging Ukrainian sovereignty. The United States on Feb. 23 announced sanctions on Nord Stream 2 AG, the operator the pipeline.

The sanctions came prior to the “special military operation” that Putin announced on Feb. 24, after which Russian troops mounted an incursion into Ukrainian territory. Putin hasn’t specified when his “peace-keeping” operation will end, but has said that Russia does not plan to occupy Ukraine in the long term. Russia is demanding guarantees that Ukraine will never join NATO.

Germany, with an annual gas consumption of about 88 billion cubic meters, gets around half of its gas from Russia. Prior to the decertification of the Nord Stream 2, Germany argued that the pipeline would diversify energy supplies for Europe. But the European Union the United States opposed the pipeline on the grounds that it would increase Europe’s energy dependence on Russia as well as denying transit fees to Ukraine, which is host to another Russian gas pipeline.

Nord Stream 2 AG on March 1 announced it had to fire all of its employees due to the Ukraine-Russia crisis that led to it being sanctioned by the United States. “We very much regret this development,” the operator told Reuters in an emailed statement at the time.

Nord Stream 2 AG is registered in Switzerland and wholly owned by Russian state-owned company Gazprom. Nord Stream 1 is owned and operated by Nord Stream AG, with Gazprom as the majority shareholder.

Separately, construction of a pipeline that would link Poland to Norwegian supplies of natural gas has resumed, Denmark-based grid operator Energinet announced on March 1.

The gas pipeline seeks to reduce Poland’s reliance on Russian gas. Poland currently gets half of its 20 billion cubic meters of total annual gas consumption from Russia’s Gazprom. The long-term contract between Poland and Gazprom expires at the end of this year and Warsaw doesn’t plan on renewing it.