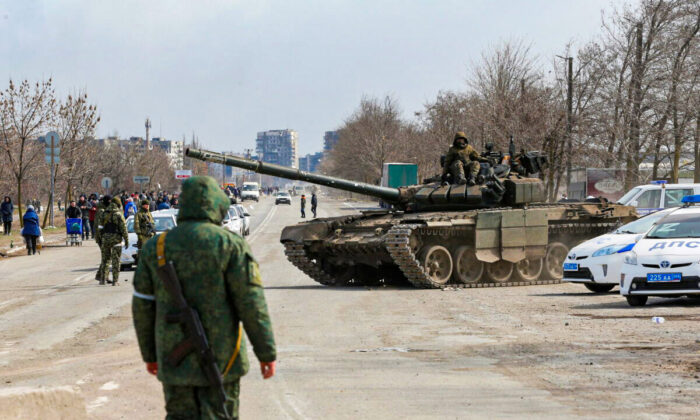 Service members of pro-Russian troops are seen atop of a tank during Ukraine-Russia conflict on the outskirts of the besieged southern port city of Mariupol, Ukraine, on March 20, 2022. (Alexander Ermochenko/Reuters)
By Jack Phillips

Russia is now withdrawing some of its troops after suffering “heavy losses” in recent days, claimed the United Kingdom’s Ministry of Defense on Thursday.

In an update posted on social media, the ministry alleged that “Ukrainian forces are continuing to counterattack to the north of Kharkiv, recapturing several towns and villages towards the Russian border.”

“Despite Russia’s success in encircling Kharkiv in the initial stages of the conflict, it has reportedly withdrawn units from the region to reorganize and replenish its forces following heavy losses,” the agency said, referring to the second-largest city, located in northeastern Ukraine near the Russian border.

But “the withdrawal of Russian forces from the Kharkiv Oblast is a tacit recognition of Russia’s inability to capture key Ukrainian cities where they expected limited resistance from the population,” the ministry continued.

Those withdrawn forces, it added, will “likely” be sent to the Siverskyi Donets River to form a blockade “to protect the western flank of Russia’s main force concentration and main supply routes for operations in the vicinity of Izyum.”

Russian military officials have not made a public comment after the United Kingdom’s assessment.

Meanwhile, it comes as Moscow threatened to retaliate against Finland after the Scandinavian country indicated that it wishes to join the NATO security alliance. Finland, which shares a border with Russia and has long remained neutral even during Soviet times, stated on Thursday it would apply to join NATO “without delay,” and Sweden is expected to follow suit.

“There is a current instruction from the president to develop a list of measures to strengthen our western flanks in connection with the strengthening of NATO’s eastern flanks,” he told state media Thursday.

Russia’s foreign ministry said Moscow would be forced to take “retaliatory steps, both of a military-technical and other nature,” giving no further details. Russian officials have spoken in the past about potential measures including stationing nuclear-armed missiles on the Baltic Sea.

Russian President Vladimir Putin has long said that NATO is attempting to expand its borders in a bid to place military pressure on Moscow. He cited that assertion as a major reason for invading Ukraine, describing it as a “special military operation.”