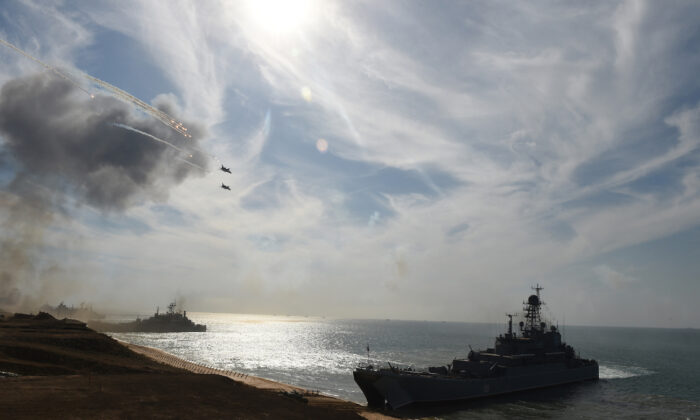 Russia's navy ships and military jets in a military exercise at the coast of the Black Sea in Crimea on Sept. 9, 2016. Vasily Maximov/AFP via Getty Images)
Russia-Ukraine War

Russia issued a formal maritime warning saying that a number of naval mines that were placed in the Black Sea—allegedly by Ukrainians in efforts to counter Moscow’s invasion—are no longer attached to their anchors and could drift toward the Straits of Bosphorus and the Mediterranean Sea.

In a press statement on Saturday, Russia’s Federal Security Service (FSB) said that Ukrainian naval forces had placed lines of mines near the ports of Odessa, Ochakov, Chernomorsk, and Yuzhny, reported state-run news agency TASS. The FSB said the mines were made in the first half of the 20th century by the Soviet Union.

It said the cables that connected the mines to the anchors had broken due to storms, and the mines were now being pushed along by winds and currents and freely drifting in the western Black Sea. The FSB added that it is feasible the mines could float toward Bosphorus and the Mediterranean Sea given the current direction of the currents.

The FSB said that Ukraine was to blame for placing the mines and that the Ukrainian forces have shown “utter ignorance” of international laws, and disregard for human lives.

The Russian Black Sea Fleet had on March 18 issued a mine hazard warning, TASS reported.

“When anchored automatic contact mines are employed, every possible precaution must be taken for the security of peaceful shipping,” part of the convention also reads.

Andrii Klymenko, co-founder and chief editor of BlackSeaNews.net portal, and head of the Monitoring Group of the Black Sea Institute of Strategic Studies, called the Russian claims “[a]nother dangerous disinformation from the enemy side.”

“The real danger at sea: Russia replaced the recommended routes from Bosphorus to Odessa, and reported that these are Ukrainian mines,” he wrote on Facebook.

Klymenko said he believes the warning is to prevent commercial shipping in the Black Sea.

“This requires the immediate deployment of NATO’s Permanent Mine Action Group to the Black Sea!” he wrote.

“We emphasize once again: according to BlackSeaNews sources, we are talking about the mining by the Black Sea Fleet of the Russian Federation of the recommended routes for commercial ships from the Bosphorus in the direction of Odessa. This is covered by a lie about ‘Ukrainian mines blown by storms,'” he added.

“Note that in principle, it is impossible to count the mines drifting in a storm—only the one who installed them can do this.”