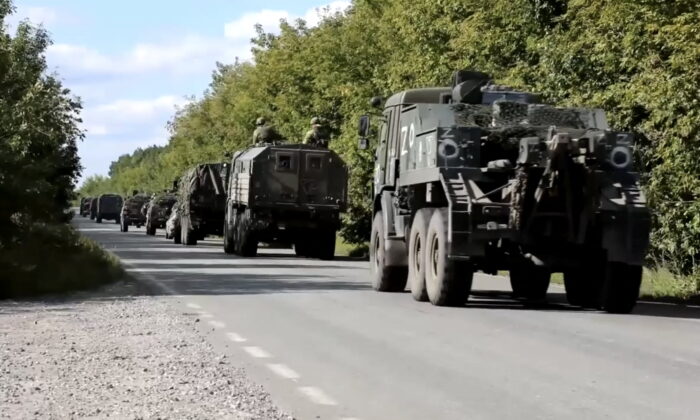 Russian Foreign Minister Sergey Lavrov says that regions of Ukraine where referendums are being held will be under the Kremlin’s “full protection” if they are annexed by Russia, raising the prospect of the use of nuclear weapons.

Residents of four Russian-occupied areas in eastern and southern Ukraine continued voting on whether to join Russia.

“Following those referendums, Russia of course will respect the expression of the will of those people who for many long years have been suffering from the abuses of the neo-Nazi regime,” Lavrov told reporters on Sept. 24 after addressing the United Nations General Assembly. He was referring to the Kyiv government.

When asked if Russia would possibly use nuclear weapons to defend any annexed regions in Ukraine, Lavrov said that any Russian territory will be “under the full protection of the state.”

“All of the laws, doctrines, concepts, and strategies of the Russian Federation apply to all of its territory,” he said while referring to Russia’s doctrine on using nukes.

Several days ago, former Russian President Dmitry Medvedev issued a warning on social media that Russia is prepared to use nuclear weapons. That came after Russian President Vladimir Putin announced he would mobilize hundreds of thousands of troops, while also issuing a veiled threat about using all weapons in Russia’s arsenal to defend its territorial integrity.

While Putin’s comment was vague, Medvedev’s post on Telegram was more explicit. Medvedev currently serves as the deputy chairman of Russia’s Security Council.

“Russia has announced that not only mobilization capabilities but also any Russian weapons, including strategic nuclear weapons and weapons based on new principles, could be used for such protection,” he wrote, according to a translation.

The referendums in four eastern Ukrainian regions, aimed at annexing territory Russia has taken by force since its invasion in February, continued for a third day on Sept. 25; the Russian parliament could move to formalize the annexation within days.

By incorporating the areas of Luhansk, Donetsk, Kherson, and Zaporizhzhia into Russia, Moscow could portray attacks to retake them as an attack on Russia itself, a warning to Kyiv and its Western allies.

Ukraine and its allies have dismissed the referendums as a sham designed to justify an escalation of the war and a mobilization drive by Moscow after recent battlefield losses.

Ukrainian President Volodymyr Zelenskyy said on Sept. 25 that his country would regain all the territory Russia had taken.

“We will definitely liberate our entire country—from Kherson to the Luhansk region, from Crimea to the Donetsk region,” he said on the Telegram messaging app.

“We have not had to do that in over 30 years. The implications of that are profound,” he said during a panel discussion last week. “They’re profound for homeland defense. They’re profound for strategic deterrence as well as us achieving national objectives. And this is no longer theoretical.”

Richard added that for the first time in decades, it’s possible the United States will have a “possible direct armed conflict with a nuclear-capable peer.”

“Russia and China can escalate to any level of violence that they choose in any domain with any instrument of power worldwide.”