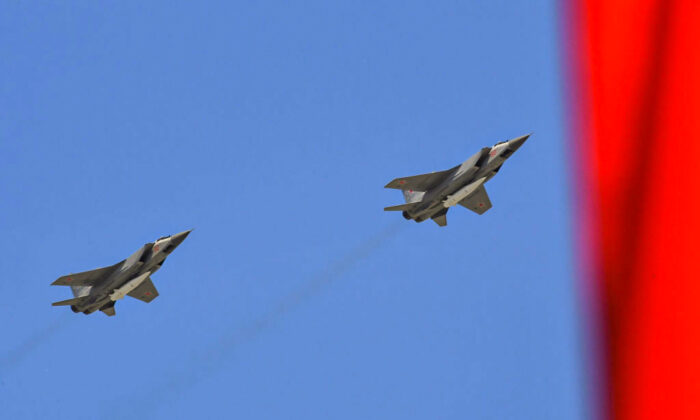 Russia said on Saturday that it has used hypersonic missiles to destroy Ukrainian military assets in what marks the first time Moscow has acknowledged using this type of weapon in combat.

The Russian defense ministry said in a March 19 operational update that on Friday it destroyed a large underground storage facility for missiles and aviation ammunition in Ukraine’s Ivano-Frankovsk region, using missiles that can travel at over five times the speed of sound.

Igor Konashenkov, the ministry spokesperson, said that the Kinzhal aviation missile system with hypersonic ballistic missiles was used in the strike.

‘Indiscriminate Use of Firepower’

The Ukrainian military on Saturday reported more attacks against Russian forces, claiming that at least 14,400 Russian soldiers had been thus far killed in combat.

British intelligence said Saturday that Russia has thus far failed to meet its original military objectives and “has been surprised by the scale and ferocity” of Ukrainian resistance.

It warned that Moscow is now “pursuing a strategy of attrition” and could resort to the “indiscriminate use of firepower” as it changes tactics, resulting in increased civilian casualties and destruction of Ukrainian infrastructure.

‘For a World Without Nazism’

Russian President Vladimir Putin held a pro-war rally on Friday, the anniversary of Russia’s annexation of Crimea. He spoke in a stadium filled with cheering and flag-waving Russians in front of signs that said “For a world without Nazism” and “For Russia,” in an apparent reference to his military campaign objectives of “demilitarization and de-Nazification” of Ukraine.

Putin justified what he called a “special military operation” in Ukraine by talking about the separatist conflict in Donbas, claiming that what went on there was “genocide” and that stopping that was the aim of the military action. He vowed that Russia would “absolutely” accomplish all of its plans in Ukraine.

It’s unclear how much support among Russians there is for Putin’s “special operation” to disarm Ukraine and topple the government in Kyiv, whom he calls “neo-Nazis.”

Polling firm Active Group carried out a phone survey on a sample of 1,557 people in Russia between March 11–14, with one of the questions asked, “should the Russian Federation militarily force other countries to abandon their support for the Nazis in Ukraine?”

The poll found that 40.6 percent of respondents said they support Russian military action in other countries over their support for Ukraine amid the current conflict, 46 percent said they weren’t sure, while 13.4 percent said no.

A long list of historians have denounced Putin’s claims of “de-Nazifying” Ukraine, calling it a “gross mischaracterization” while labeling his rhetoric as “factually wrong, morally repugnant, and deeply offensive to the memory of millions of victims of Nazism and those who courageously fought against it, including Russian and Ukrainian soldiers of the Red Army.”

‘The War Must Be Ended’

Ukrainian President Volodymyr Zelensky, meanwhile, called for meaningful peace and security talks with the Kremlin, saying in a video address early on Saturday that “the time has come for a meeting, it is time to talk.”

“The time has come to restore territorial integrity and justice for Ukraine. Otherwise, Russia’s losses will be such that it will take you several generations to recover.”

Over 3.3 million people have fled Ukraine amid the fighting, according to the U.N., while at least 816 civilians have been killed.