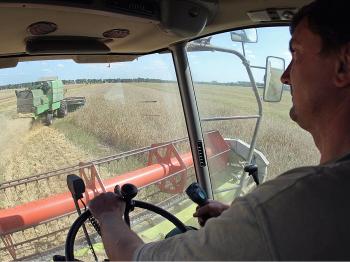 Ilya Rzhevskiy
View profile
Follow
biggersmaller
Print
Following raging forest fires, an extreme heat wave, and a record draught, Russia has lost one-third of its crop harvest, as an estimated 10 million hectares of agricultural land has been either burned or devastated by extreme weather conditions.

As a result, Russian Prime Minister Vladimir Putin has put a ban on grain export starting on Aug. 15 and ending on Dec. 31. The intention of the ban is to avoid grain shortages and to control the local prices of grain and therefore avoid a sharp price hike on food supplies in Russia that could easily lead to hunger and social unrest.

"We must not allow an increase in domestic prices and must preserve the headcount of our cattle," said Putin in a public address.

If the price of grain rises, it would not be profitable for farmers to keep cattle because they are mainly fed on grains and they will be slaughtered as a result.

Russia, being the world’s third-largest crop producer, has sent a worrying message to food markets worldwide. The export ban will certainly affect global prices on grain even further, which have already risen to the maximum point over the last two years.

In contrast to the prime minister, the Russian President Dmitry Medvedev, has expressed a concern for crop producers who have been put in a tough position by the export ban.

"We have put producers involved in exports into a difficult position. Having done this, we must help them have the legal proof that (there) was a force majeure [superior force] and it was not possible to fulfill deliveries," said the Russian president.

Some people in Russia have criticized the ban, citing that it would take the country years to regain its international market position, as it will lose its customers. The ban can also put many Russian producers out of business, as they would lose the opportunity to sell for better prices to the foreign customers.

Following Russia’s ban on grain exports, Ukraine, the world’s biggest barley exporter, may also introduce ban quotas for its grain exports that were also damaged by a severe summer draught.

“We will reach an agreement with grain producers and exporters by Monday,” said Agriculture Minister Mykola Prysyazhnyuk to reporters last week, following a government meeting in Kyiv. “Our main task is to ensure food security in Ukraine, while not to lose export position and image abroad. I think introducing quotas for exports makes sense.”

Ukraine harvested 13 percent less grain compared to the same time last year. The export quotas could initially be applied to wheat and be set at between 7 million and 8 million tons of grain. After the harvest, the government will make further adjustments to the quotas according to the abundance of different grain types.

“It’s no use waiting for a quick solution to the problem,” UkrAgroConsult said today in a note. “Practice shows that the distribution of quotas is not a quick process.”

In response to the market shortage of grain, mainly caused by poor harvests and export bans in Russia, Ukraine, and Canada, United States grain production will rise 2.2 percent, said the U.S. Department of Agriculture last week.

U.S. grain reserves this year will be the second largest since 1987, reaching 2.265 million metric tons.

Kansas is the biggest producer of winter wheat in the United States.