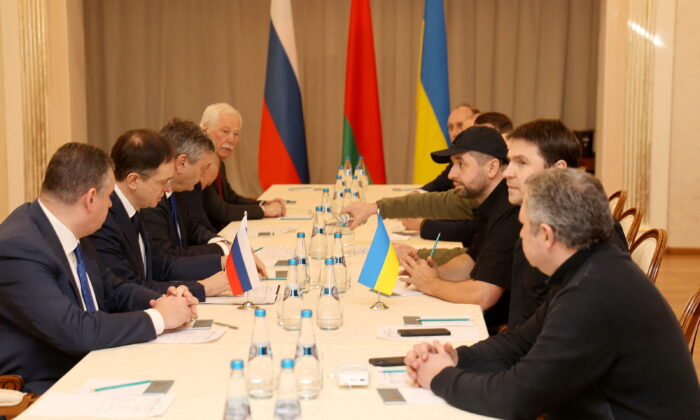 Russian and Ukrainian officials take part in the talks in the Gomel region, Belarus, on Feb. 28, 2022. (Sergei Kholodilin/BelTA/Handout via Reuters)
Russia-Ukraine War

Talks between representatives from Russia and Ukraine have begun near the Belarusian border as the war between Moscow and Kyiv entered the fifth day, with Russian forces capturing two Ukrainian cities.

Earlier, the Ukrainian president’s office had stated that the goal of the talks was to achieve an immediate ceasefire and encourage the withdrawal of Russian forces from the country. The meeting, which began just before 6 a.m. ET on Feb. 28, features the participation of multiple high-ranking Ukrainian officials. However, President Volodymyr Zelensky is not among them. He had warned that the next 24 hours would be “crucial” to the country.

Russian military recently captured Berdyansk and Enerhodar, two small cities in Ukraine’s southeastern region. There have been reports that Russian forces have taken over the region around the Zaporizhzhya nuclear power plant. The Ukrainian government has denied this.

Before dawn, blasts were heard in Ukraine’s capital city of Kyiv. According to the UK’s defense ministry, the majority of Russia’s ground forces are at least 19 miles (30 kilometers) away from the north of Kyiv.

Blasts were also heard from another major Ukrainian city, Kharkiv. Dozens of people have died there due to mass rocket shelling, while hundreds have been wounded, according to Ukrainian interior ministry adviser Anton Herashchenko.

The death toll among civilians in Ukraine is estimated to be 102, according to U.N. High Commissioner for Human Rights Michelle Bachelet, with 304 injured. The real numbers could be “considerably higher,” Bachelet said.

On Sunday, Ukraine’s interior ministry had revealed a higher civilian death toll at 352. Russia is said to have fired over 350 missiles at targets in Ukraine. Over 500,000 Ukrainians have fled to neighboring countries.

Meanwhile, Russia’s invasion of Ukraine is said to be behind schedule. The advance of Russian ground forces has been slowed by Ukrainian forces defending Hostomel airfield, which was a key day-one objective of the Russian military, according to the UK’s Ministry of Defense.

The Russian military’s logistical failures as well as the staunch resistance from Ukrainians continue to “frustrate” Moscow’s advance, the Ministry of Defense said. Russian forces have admitted to suffering casualties for the first time.

Zelensky has called on the European Union to quickly admit his country into the bloc.

“We appeal to the European Union for Ukraine’s immediate accession under a new special procedure,” Zelensky said in an address. “We are grateful to our partners for being with us. But our goal is to be with all Europeans and, most importantly, to be equal. I’m sure that’s fair. I am sure we deserve it. I am sure that all this is possible.”