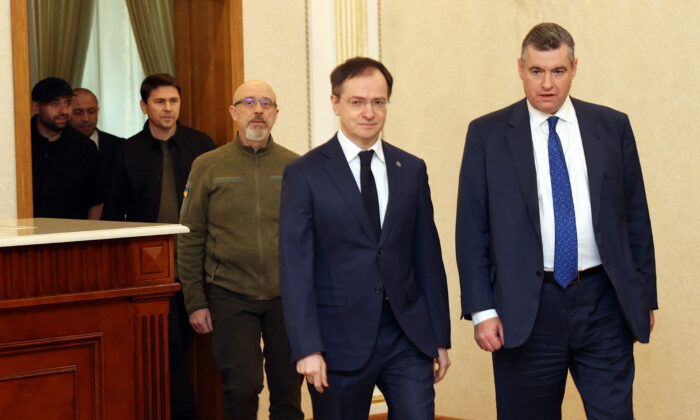 Negotiations between Russian and Ukrainian officials in a third country on Feb. 28 yielded no results, officials said after the talks concluded.

Russian President Vladimir Putin and Ukrainian President Volodymyr Zelensky sent top officials as intermediaries as Russian and Ukrainian forces continued battling in Ukraine, including near major cities such as Kyiv. The negotiations were held in Belarus, which has allowed Russian forces to pass through during the war.

Mykhailo Podolyak, a top adviser to Zelensky, told reporters after talks broke off that the primary aim was to discuss a ceasefire.

Podolyak later took to Twitter, writing: “Negotiations are difficult. However, without any obligatory ultimatums already. Unfortunately, the Russian side is still extremely biased regarding the destructive processes it launched.”

“The next meeting will take place in the coming days at the Polish–Belarusian border. There is already a relevant agreement. Before the meeting, both delegations, the leaders of both delegations, will consult with their countries’ leadership concerning their negotiation positions,” Medinsky said.

In Washington, Ned Price, a spokesman for the U.S. State Department, said the United States supports Ukraine attempting to reach a diplomatic resolution to the conflict, but said it would be difficult to hammer out a pact while fighting was ongoing.

Russian troops, on Putin’s orders, entered Ukraine on Feb. 24 and have moved toward Kyiv in the intervening days.

Fighting has taken place around Kyiv, Kharkiv, and other major cities.

As the negotiations took place, other officials appeared at the United Nations in New York.

Sergiy Kyslytsya, the Ukrainian ambassador to the U.N., told the assembled representatives that the U.N.’s General Assembly “should be vocal in demanding from the Russian Federation to stop its offensive against Ukraine as an act of aggression against a sovereign and independent state.”

The assembly should demand Russia immediately and unconditionally withdraw its troops from Ukraine and reverse the recognition of portions of eastern Ukraine as independent, he said, as well as recognizing “the treacherous role of Belarus” in the conflict.

Vassily Nebenzia, Russia’s ambassador to the U.N., later said the crisis was precipitated by the actions of Ukraine, including flouting obligations under the Minsk agreement reached in 2014.

“Our Western colleagues have shamelessly inundated the country with weapons, have sent to the country instructors and effectively incited Ukrainians, who are facing a 120,000 strong military contingent, and prompted them to engage in armed provocation against the Donbas,” he said, referring to one of the regions, adding that Russia’s army “does not pose a threat to the civilians of Ukraine, is not shelling civilian areas and areas and cities where Russian armed forces have taken control, and these areas are seeing citizens living their lives normally.”