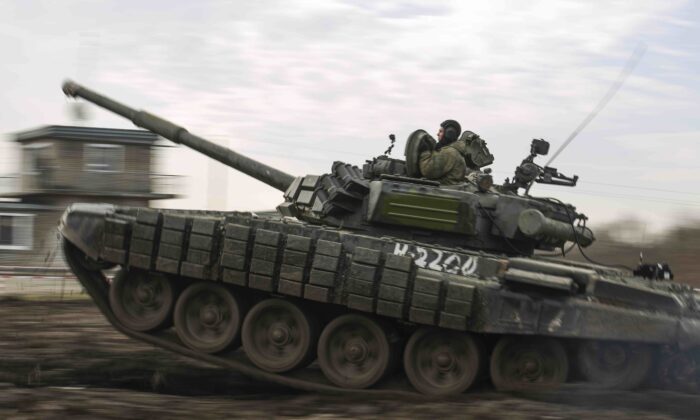 A Russian tank rolls during military drills at Molkino training ground in the Krasnodar region, Russia, on Dec. 14, 2021. (AP)
Europe

Russia Says It’s Pulling Back Some Forces from Ukraine Border

Russian officials said on Feb. 15 that some units taking part in military exercises near the Ukrainian border would start returning to their bases, sparking hope that the Kremlin might not invade Ukraine after all amid a massive troop buildup that put Western leaders on high alert for an “imminent” attack.

“The units of the southern and western military districts, having completed their tasks, have already begun loading onto rail and road transport and will begin moving to their military garrisons today,” Russia’s Defense Ministry spokesman Igor Konashenkov said in a statement.

While it is unclear how many troops Russia is withdrawing, Konashenkov suggested that other Russian units stationed near Ukraine’s border would follow suit.

“As the combat training measures are completed, the troops, as always, will make marches in a combined way to the points of permanent deployment,” he added.

Konashenkov’s announcement came after weeks of heightened tensions as Western leaders warned that Russian forces were poised for an imminent invasion of neighboring Ukraine.

White House national security adviser Jake Sullivan told CBS’ “Face the Nation” program on Feb. 13 that there has been a “dramatic acceleration” in the Russian troop buildup over the prior 10 days, with military action possible “essentially at any time.”

“We also are watching very carefully for the possibility that there is a pretext or a false flag operation to kick off the Russian action in which Russian intelligence services conduct some kind of attack on Russian proxy forces in eastern Ukraine or on Russian citizens, and then blame it on the Ukrainians,” Sullivan added.

While Russia has amassed about 130,000 troops, plus artillery and other heavy equipment, close to Ukraine’s border, the Kremlin has denied planning an attack, saying the military movements are about maintaining security against NATO aggression.

Moscow has asked the United States and its allies for a binding commitment that they won’t accept Ukraine into NATO. Russia also wants the alliance to halt weapons deployments to Ukraine and roll back its forces from Eastern Europe.

On Monday, signs of hope for de-escalation came when Russian Foreign Minister Sergey Lavrov indicated that Moscow was ready to keep talking about the security grievances that have fed into the crisis.

The talks “can’t go on indefinitely, but I would suggest to continue and expand them at this stage,” Lavrov said at a made-for-TV meeting with Putin that seemed designed to convey to the world the Russian leader’s position. In his comments, Lavrov noted that Washington has offered to discuss limits for missile deployments in Europe, restrictions on military drills, and other confidence-building measures.

Despite the hopeful signs, however, the United States and European countries have kept up their warnings.

“The path for diplomacy remains available if Russia chooses to engage constructively,” White House deputy press secretary Karine Jean-Pierre said. “However, we are clear-eyed about the prospects of that, given the steps Russia is taking on the ground in plain sight.”

British Foreign Secretary Liz Truss said Tuesday that an invasion risk remains, telling Sky News that it “could be imminent.” She added that “there is still time for Vladimir Putin to step away from the brink.”

European and Russian stocks rallied while oil prices retreated on Tuesday morning after Konashenkov’s remarks about the troop pullback, as markets welcome his declaration as a sign that a military conflict may be averted.