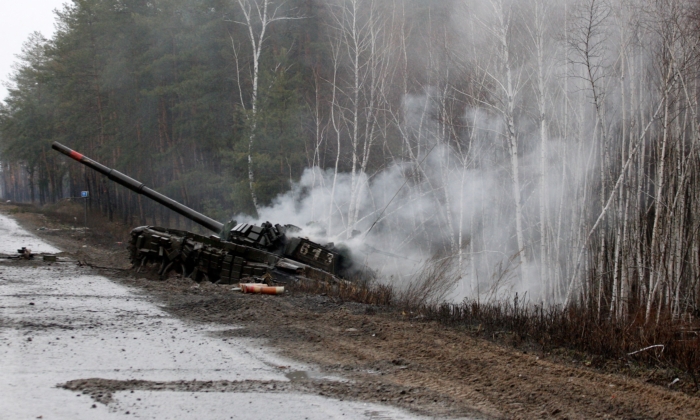 Smoke rises from a Russian tank destroyed by the Ukrainian forces on the side of a road in Lugansk region on Feb. 26, 2022. (Anatolii Stepanov / AFP via Getty Images)
Russia-Ukraine War

Russia Says It Lost 498 Soldiers in Invasion, One Tenth of Ukraine’s Estimate

For the first time since its invasion of Ukraine began last week, Russia disclosed its war casualties on March 2, with a defense ministry spokesperson saying nearly 500 military personnel have lost their lives in the conflict.

Russian Defense Ministry spokesman Maj. Gen. Igor Konashenkov said that 498 Russian soldiers had been killed and 1,597 wounded as part of what Moscow continued to call a “special military operation.”

Ukrainian authorities estimate the Russian death toll at more than 10 times the number cited by Konashenkov.

“Regretfully, among our friends participating in the special military operation, there are losses.  498 Russian military servicemen died while carrying out their warrior’s duty,” Konashenko said.

The spokesman said that the military is “eliminating a real threat, which until recently emanated from Ukraine.” He added that despite the wishes of the Ukrainian people the nation would have soon been used “to stage NATO bases and nuclear weapons.”

According to Konashenkov, 2,870 Ukrainians had been killed and roughly 3,700 wounded to date. Russian forces have captured 572 prisoners of war, he added.

Konashenkov described the Ukrainian death toll as being comprised of “nationalists and military service members,” suggesting that the total included civilians.

In a near-unanimous vote, the United Nations voted on Feb. 2 to demand that Russia withdraw its forces from Ukraine. Representatives from Belarus, Cuba, North Korea, and Syria voted against the resolution.

The vote took place as a Russian armored convoy drew closer to Kyiv, Ukraine’s capital. Elsewhere, the Russian forces bombarded residential areas along the lines of advance and say they have captured the Ukrainian cities of Kherson and Melitopol.

Russia and Ukraine are scheduled to meet for the second round of talks in Belarus on March 3.

The Russian military in the meantime launched another round of aerial strikes on Kharkiv, Ukraine’s second most populous city of some 1.5 million people. The strikes killed 21 people and wounded 112, according to Oleg Sinehubov, the head of the Kharkiv regional administration.

Several Russian planes were shot down over Kharkiv, according to Oleksiy Arestovich, a top adviser to Ukrainian President Volodymyr Zelensky.

“Kharkiv today is the Stalingrad of the 21st century,” Arestovich said, invoking what is considered one of the most heroic moments in Russian history, the five-month defense of the city from the Nazis during World War II.

Russian attacks, many with missiles, blew the roof off Kharkiv’s five-story regional police building and set the top floor on fire, and also hit the intelligence headquarters and a university building, according to officials and videos and photos released by Ukraine’s State Emergency Service.