Russia Planning to Annex Parts of Eastern Ukraine in Mid-May: US Official 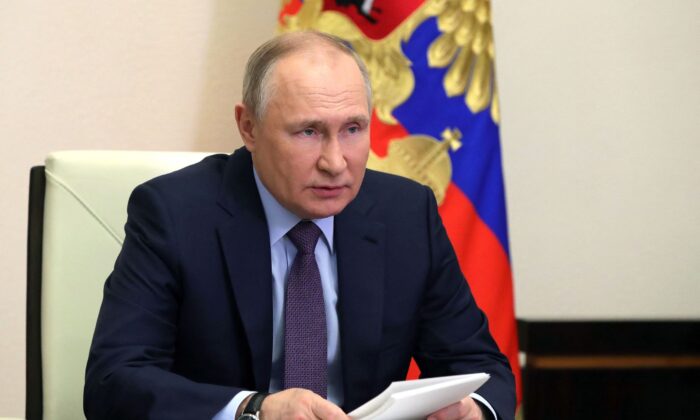 Russian President Vladimir Putin chairs a meeting on the situation in the oil and gas sector at the Novo-Ogaryovo state residence outside Moscow, on April 14, 2022. (Mikhail Klimentyev/Sputnik/AFP via Getty Images)
By Katabella Roberts

Michael Carpenter, U.S. ambassador to the Organization for Security and Cooperation in Europe, said during a press briefing that the United States is concerned with Russia’s political intentions in Ukraine, particularly those focused in the south and east.

He added that U.S. officials have “information that Russia’s initial planning included a plan for a forced capitulation of Ukraine’s democratically elected government as well as dissolution of local government structures. And that plan, to the best of our information, included plans not just for a new government in Ukraine but also for a new constitution.”

The ambassador said that the Kremlin would now likely stage “sham referenda” in the Russian-backed separatist territories of Donetsk and Luhansk sometime in mid-May to “try to add a veneer of democratic or electoral legitimacy,” something he said was “straight out of the Kremlin’s playbook.”

A similar referendum could follow in Kherson, southern Ukraine, where the Kremlin is reportedly attempting to organize a Kherson “people’s republic,” he said.

After the democratically elected leaders are removed, Russia would likely install the Kremlin’s “puppets and proxies” into those areas, he said.

Carpenter did not provide further details as to the origins of the reports but said that government officials are monitoring the situation very closely to see whether Putin may attempt to orchestrate such a move in the near future.

He also noted that the United States and its international allies would not recognize such a sham referendum, adding that “fabricated votes will not be considered legitimate, nor will any attempts to annex additional Ukrainian territory.”

Russia has not publicly commented on Monday’s allegations.

Putin recognized the separatist Donetsk and Luhansk regions as independent of Ukraine just days before launching his “special military operation” on Feb. 24.

His decision came after the leaders of the two areas, which make up much of the Donbas, requested on Feb. 21 that he do so.

However, Russian-backed separatists in those regions have been fighting against the Ukrainian army since 2014, when they declared independence from Ukraine, at around the same time that Putin annexed the Crimean peninsula in a vote that has been widely condemned as fraudulent.

Elsewhere on Monday, Carpenter said that House Speaker Nancy Pelosi’s visit to Ukraine’s capital where she met with Ukrainian President Volodymyr Zelenskyy sent a “clear message that the United States stands with Ukraine.”

“It underscores the strong bipartisan commitment of the American people to supporting the brave people of Ukraine who are standing up the Kremlin’s brutality,” the ambassador said.

Pelosi and a delegation of U.S. lawmakers traveled to Kyiv to meet with Zelenskyy while Congress works with the White House to pass a $33 billion aid package for Ukraine.