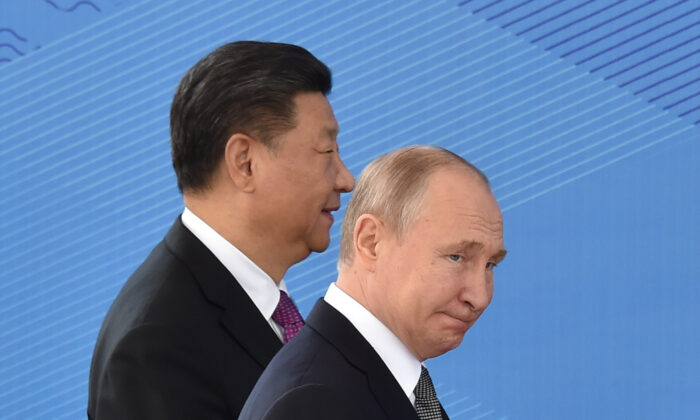 Russian President Vladimir Putin and Chinese leader Xi Jinping walk as they attend a meeting of the Shanghai Cooperation Organisation Council of Heads of State in Bishkek on June 14, 2019. (Vyacheslav Oseledko/AFP via Getty Images)
Russia-Ukraine War

Russia, China ‘Plotting Behind the Scenes’ Ahead of Ukraine Invasion: Congressman

Moscow and Beijing have been keeping each other abreast of their plans in the leadup to the Ukraine attack, according to two lawmakers.

“I think they have coordinated and I think that China is in a better position letting Russia go first, to evaluate,” Rep. Ken Buck (R-Colo.) told EpochTV’s “China Insider” program at the Conservative Political Action Conference (CPAC) on Feb. 25.

By watching the world’s reaction on Ukraine, China is trying to gauge its next steps on Taiwan, the self-ruled island that the Chinese Communist Party claims as its own territory and long planned to bring under its control, by force if necessary.

“China has designs on Taiwan,” said the lawmaker during an interview in Orlando, Florida. “And they want to see if the world imposes real sanctions on Russia, and how much it hurts Russian, and what really the willpower is to stop an aggressive nation from gaining further territory.”

He made a particular note of Russian leader Vladimir Putin’s meeting with China’s Xi Jinping at the Beijing Olympics’ opening day three weeks ago, which ended with the two countries forming a “no limits” partnership.

“They’ve been plotting behind the scenes,” he told NTD, an affiliate of The Epoch Times, at the CPAC event.

Ukraine was one subject discussed during “in-depth discussions” between the two nations’ foreign ministers, which took place a day prior to the Xi-Putin meeting. From the Kremlin readout, Moscow also “reaffirms its support” for Beijing’s claim that Taiwan is part of China.

Since the Russian invasion of Ukraine, the Chinese foreign ministry has been peppered with questions about whether Xi had prior knowledge about the plan and even gave Putin “his blessing,” but its officials had avoided making a direct answer.

She accused the reporter of having “rich” imagination when asked if the timing of the assault, only days after the Beijing Olympics concluded, was coincidental.

The intensifying Ukraine crisis is a boon for Beijing, Buck said. A military conflict would shift the U.S. attention away from its rivalry with China, handing Beijing an opportunity to exploit.

“If the United States starts pouring troops into Europe to defend Europe and do our part as a NATO partner, we are not going to be able to do what we want to do or need to do in the Pacific,” said Buck.

“It serves as a distraction,” he added.

“In China’s view, it serves as a way of siphoning off resources that can be used in other areas,” the congressman said. “China is most interested in making sure that this is prolonged, and that Russia continues to maintain a threat to the Baltics, Poland, to Hungary, to other countries in Europe.”

Beijing has so far refrained from directly labeling Russia’s attack on Ukraine as an invasion, but at the same time has maintained that it respects “all countries’ sovereignty and territorial integrity,” an oblique reference to its insistence that Taiwan is part of China.

While the United States is not ready to engage in a ground war with Russia over Ukraine, the stakes are different when it comes to Taiwan, said Buck.

“Taiwan sits in a position that could impact our ability to trade with Japan, with Korea and other neighbors,” he added. “And to really embolden China to interfere with strategic trading partners … I don’t think the United States wants that to happen.”

According to a January poll by the Trafalgar Group, an overwhelming majority of Americans are against sending troops or military equipment to Ukraine in the event of a Russian invasion. Only 15 percent of those polled believed that the United States should provide troops, while 30 percent believed it should provide weapons and other supplies only.

By contrast, 58 percent of those polled believed that U.S. military assets should be used to defend Taiwan in the event of an invasion by mainland China.

“It’s absolutely critical that they [Beijing] realize if they attack [Taiwan] that will end up in serious military confrontation with the United States,” Chabot said, in calling Washington to change its long standing policy of strategic ambiguity, in which the United States remains deliberate vague on whether it’d come to Taiwan’s defense in the event of a Chinese invasion.

“China is not being at all helpful,” Chabot added. “But that’s not unexpected because the two chief rivals on the globe right now … the worst of the bad actors are Putin and Xi—Russia and China.”