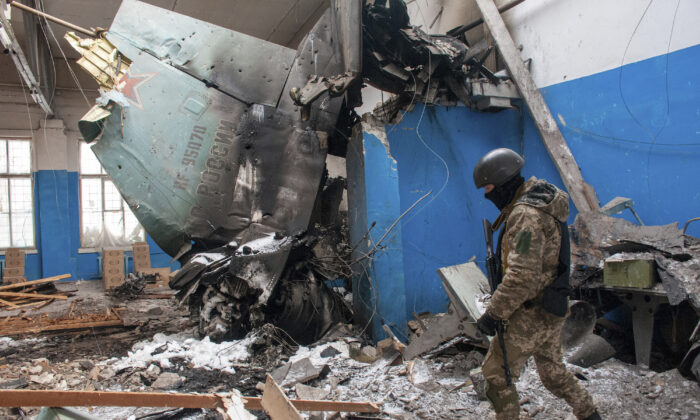 A Ukrainian serviceman walks past the vertical tail fin of a Russian Su-34 bomber lying in a damaged building in Kharkiv, Ukraine, on March 8, 2022. (Andrew Marienko/AP Photo)
Russia-Ukraine War

The Russian Ministry of Defense on Wednesday alleged it found secret documents showing Ukraine’s government was planning an offensive against the breakaway Donbas separatist areas.

The ministry, along with the Foreign Ministry, posted the alleged government invasion plan on social media. The Epoch Times has not been able to verify its authenticity.

“The document approves the organizational and staff structure of the battalion tactical group of the 4th operational brigade of the National Guard, the organization of its comprehensive support and reassignment to the 80th separate air assault brigade of Ukraine,” Russian defense ministry spokesman Igor Konashenkov said on the Foreign Ministry’s Telegram page.

The unit is of “the air assault troops of Ukraine has been trained since 2016 by American and British instructors,” he added.

Ukrainian officials have not issued any public comments on Russia’s claims.

Konashenkov did not address airstrikes or shelling of Ukrainian cities, reports of Russian military casualties, or how the campaign is going. In recent days, U.S. Defense officials have said that Russia’s campaign is bogged down due to logistics and supply problems, although its troops are making some advances.

The Kyiv government has previously denied military plans to regain control of Donetsk and Luhansk, located in the Donbas, saying that Moscow was preparing a pretext to invade Ukraine. U.S. officials made similar statements they believe Russia is planning a “false flag” operation to justify its invasion of the country.

It comes as the City Council of the southern Ukrainian city of Mariupol said that Russian forces destroyed a maternity hospital in the city. Mariupol is located in the Donetsk Oblast, although it was not under the control of the separatists.

“The destruction is enormous. The building of the medical facility where the children were treated recently is completely destroyed. Information on casualties is being clarified,” the council said.

The incident was also condemned by officials in Kyiv, including Ukrainian President Volodymyr Zelensky.

“A maternity hospital in the city center, a children’s ward and department of internal medicine … all these were destroyed during the Russian air strike on Mariupol … just now,” Pavlo Kyrylenko, the head of Ukraine’s Donetsk regional administration, said in a statement.

At least 474 civilians have died and 864 have been injured since the Feb. 24 invasion started, according to U.N. figures. The real toll is feared to be much higher.

The United Nations’ refugee agency said that about 2 million people in all have fled Ukraine to neighboring European countries.

The Epoch Times has contacted the Ukrainian Embassy in the United States as well as the State Department for comment.