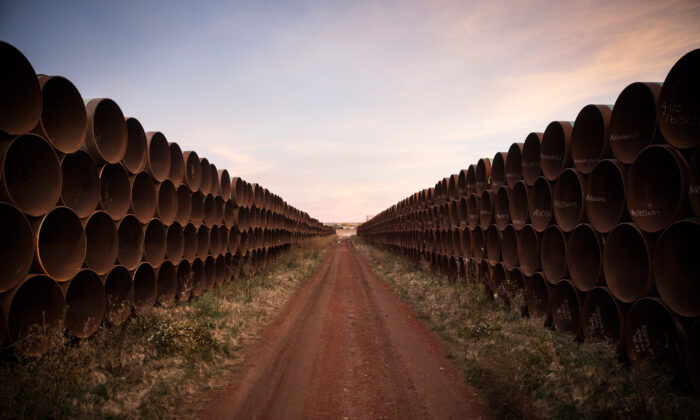 This is part one of a series exploring the effects of President Joe Biden’s cancellation of the Keystone XL oil pipeline.

MURDO, S.D.—For more than a decade, Jeff Birkeland had been waiting expectantly in the hope that the Keystone XL (KXL) pipeline would finally materialize and bring with it a much-needed boost to his rural community. His dreams were dashed overnight.

Birkeland is the CEO of West Central Electric Cooperative, which is located in Murdo, a small city in South Dakota with a population of less than 1,000. TransCanada, now known as TC Energy, the firm that commissioned the KXL pipeline, first approached his company back in 2008.

In 2011, he signed a contract with TC Energy to build a transmission line and two substations that would serve power along the KXL route. West Central Electric was meant to start producing power for pump stations along the XL route as early as November 2011, before the pipeline was put on hold.

In March 2019, then-President Donald Trump granted TC Energy a presidential permit to construct and operate the XL pipeline. Biden revoked that permit via executive order in one of his first moves as president.

“It basically shut a lot of what we were doing down overnight,” Birkeland told The Epoch Times. “We’re out $90 million, that’s what that means to us.”

Electric co-ops are private companies that deliver electricity to their customers, also known as members. Rural electric cooperatives serve 56 percent of the nation and account for about 12 percent of total electricity sales in the United States, according to the National Rural Electric Cooperative Association.

There are multiple co-ops in the area that range in size in terms of employees and areas they cover. West Central Electric has more than 3,671 members and covers more than 7,000 square miles, and Birkeland said the cancellation of the project hits small rural communities like Murdo especially hard.

Birkeland fired off a number of figures highlighting the negative economic effects of the KXL cancellation, during an interview at his office.

If they had been able to start work on the project in 2012, school districts in the area would have received $1.7 million in tax revenue, he said. South Dakota will also miss out on $4 million in state sales taxes. And if the entire pipeline was up and running, it was expected to generate more than $100 million in property tax revenue along the route. The pipeline would also contribute $3.4 billion to the GDP of the United States on an annual basis.

His company now has $14 million worth of materials sitting idly in the warehouse.

“Essentially, this tells me our rates are going up,” he said. “We’re sparsely populated and this load represented growth and opportunity for our members. That’s what’s tough—if you sit at my desk, you’re trying to figure out what’s best for your members.”

The cries of help from rural communities are starting to be heard. Fourteen Republican attorneys general are urging Biden to reconsider his decision to cancel a permit for the construction of the pipeline, to prevent severe economic harm. They are also threatening to take legal action.

Kit Talich, a staff engineer at West Central, said he understands there are people and arguments on both sides of the pipeline deal, but he said the project would have been a “good boost” to rural South Dakota and would help keep things running.

“We have been working on this project on and off—through the starts and stops and delays—for about 12 to 13 years now,” Talich told the Epoch Times. “We put a lot of time into it … so it was a little disappointing to see something like that pulled away with a swipe of a pen and 10 minutes after [Biden was] sworn in.

“I would like to see it revived, it would help the local communities a lot,” he added. “Again, it’s what Washington wants to do—they don’t care about us out here too much.”

Biden’s executive order states that the KXL pipeline “disserves the U.S. national interest,” arguing that the country is facing a “climate crisis.” The Biden administration has made combating climate change a key part of its agenda and has often talked about creating renewable energy jobs and reducing emissions.

TC Energy has stated that its intention to make the pipeline project emissions-neutral. The company announced in a Jan. 17 statement before Biden signed the executive order that it would “achieve net zero emissions across the project operations” when the pipeline is in service in 2023. TC also committed to operations being “fully powered by renewable energy sources no later than 2030.”

As part of the announcement, TC Energy stated it was also expected to invest more than $1.7 billion in communities along the KXL footprint and would create “approximately 1.6 gigawatts of renewable electric capacity, and thousands of construction jobs in rural and Indigenous communities.”

The $1.7 billion investment is big enough in itself, said Birkeland, who pointed out that many of the transmission lines in the country are old. He said about 70 percent of West Central’s transmission lines were built in the 1950s and are still being used today.

“This brings opportunity to upgrade our old transmission lines and substations, put in some new renewables,”
Birkeland said. “That’s what we all want—it makes sense, it’s a win-win, and it reduces the carbon footprint.”

Birkeland said he’s still optimistic about the Keystone project and hopes to be able to sit down and speak with Biden. He wants to explain his side of the story to the president and hopes to hear Biden’s point of view. No one from the Biden administration has yet reached out to the affected communities to discuss the project, he said.

The Biden administration didn’t respond to a request by The Epoch Times for comment by press time.

Meanwhile, electric co-ops themselves are relying more on renewable sources. There has been an increase in the use of natural gas and renewable energy, which has helped to reduce the co-ops’ carbon dioxide emissions by 18 percent from 2009 to 2019, according to the National Rural Electric Cooperative Association.

Keeping electricity rates down is key for co-ops, since these companies serve “92 percent of persistent-poverty counties in America,” according to the association. The opportunity that the pipeline would have provided would have been a “key pillar” to reducing the company’s electricity rates, Birkeland said.

“The larger revenue base you have, you get to spread your expenses out,” he said. “That’s just simple economics. It makes your rates lower. When the administration talks about wanting to create new jobs—here it is.”

There are also countless other local businesses in Murdo, as well as in nearby towns and cities, that had spent money to juice up their businesses in response to the construction of the KXL pipeline. Now, their money and their investments have gone down the drain, Birkeland said.