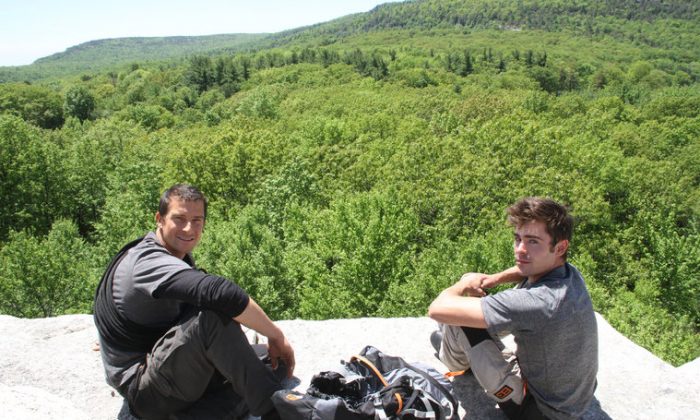 Running Wild With Bear Grylls kicks off on Monday, July 28.

The premiere episode, which starts at 8 p.m. EDT, features Bear pushing Zac Efron to the limit as they head deep into the wilds of the Catskill Mountains.

A number of video previews released by NBC show the pair “running wild” in the wilderness.

“With Bear’s help, Zac challenges himself physically as well as mentally on an awe-inspiring journey he could never have imagined,” the network said in the episode description.

In the six episodes that have been ordered so far, Grylls also taken Ben Stiller, Channing Tatum, Deion Sanders, Tom Arnold, and Tamron Hall on adventures.

“Each of the celebrities endure the harsh wilderness in high-octane, action-based and empowering journeys spread over six remote locations. From skydiving into the Catskill Mountains, to repelling down the cliffs of Utah and battling torrential wind and rain in Scotland, Grylls and each celebrity will have to push both their minds and bodies to the limit to successfully complete their journey,” NBC previewed.

“‘Running Wild’ allows viewers to see inside the hearts and minds of these guests in a very open, honest and vulnerable way, pushing them out of their comfort zones and seeing what they are like in real life when stripped of all the benefits of celebrity,” said Grylls in the announcement. “Ultimately, this show is about taking these stars on the adventure of a lifetime and being alongside them when they discover something new and empowering about themselves and their world. For me, that is always a privilege.”