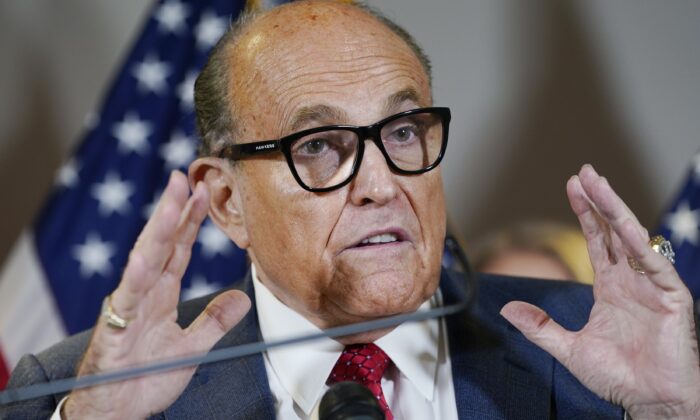 A U.S. appeals court ruled on July 7 that Rudy Giuliani can’t practice law in Washington, a move that follows the suspension of Giuliani’s New York law license two weeks ago.

The order (pdf) from the District of Columbia Circuit Court of Appeals comes after Giuliani, who served as the personal attorney for former President Donald Trump, had his law license revoked for making what the New York Supreme Court described as “false and misleading” statements following the Nov. 3 presidential election.

Giuliani is “suspended from the practice of law in the District of Columbia pending final disposition of this proceeding, effective on the date of entry of this order,” the July 7 order states.

The filing cites the suspension of Giuliani’s New York law license and says that his Washington license is revoked pending the result of disciplinary proceedings in New York.

The New York appellate division said on June 24 that the “false and misleading” statements he made to courts, lawmakers, and the public “immediately threatens the public interest and warrants interim suspension from the practice of law.”

Giuliani led a legal effort following the results of the 2020 presidential election, alleging that Trump was fraudulently denied victory in key swing states, including Arizona, Georgia, and Pennsylvania.

The court said Giuliani’s “incredibly serious misconduct … directly inflamed tensions that bubbled over into the events of January 6, 2021, in this nation’s Capitol.”

“One only has to look at the ongoing present public discord over the 2020 election, which erupted into violence, insurrection, and death on January 6, 2021, at the U.S. Capitol, to understand the extent of the damage that can be done when the public is misled by false information about the elections,” the court said at the time.

The court order noted that the suspension of Giuliani’s law license is temporary and depends on the outcome of a full formal disciplinary hearing. Giuliani later said he would go to court to fight the ruling.

The former New York mayor argued following the June 24 ruling that none of his comments were a threat to the public.

“I made all those statements—not a single one of them led to a protest, a riot, an incident, an anything,” he told Newsmax. “Obviously, those statements do not have the impact of creating danger.

“America is not America any longer. We do not live in a free state. We live in a state that’s controlled by the Democrat Party, by [Gov. Andrew] Cuomo, by [New York City Mayor Bill] de Blasio, and the Democrats.