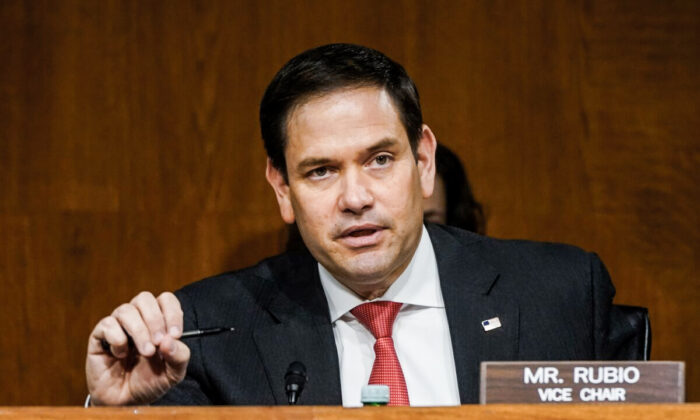 Sen. Marco Rubio (R-Fla.) on Dec. 1 blocked a quick deal for votes on amendments to an annual defense policy bill, over his unsuccessful proposal that would have held the Chinese regime accountable for its human rights abuses.

Rubio had sought an amendment to be included in the National Defense Authorization Act (NDAA) for fiscal year 2022 that would block imports from China’s northwestern Xinjiang region, where Chinese Communist Party (CCP) officials are accused of facilitating forced labor by arbitrarily detaining around 1 million Uyghurs and other ethnic minorities in a network of camps.

While the Republican senator’s amendment had been included in an amendment list distributed to Senate offices on Dec. 1, his proposal wasn’t among the 24 amendments to the NDAA scheduled for a vote on Dec. 2.

According to The Hill, the structure of the amendment deal meant that his proposal faced a procedural snag, and it would have been discarded before a final vote on the NDAA. Democrats told Rubio that his amendment violates Article 1, Section 7, Clause 1 of the Constitution that states that legislation that raises revenue must originate in the House.

Rubio on Dec. 1 accused the House of disregarding his amendment, which formerly passed the Senate, “because they’re not for it.”

“They can basically use it [blue-slip objection] on virtually anything. They can just apply it to anything they don’t like,” Rubio said. “This is really not about revenue-generating. … This is about the fact that they don’t want this to pass over in the House.”

The Senate on Nov. 29 blocked the NDAA, which authorizes some $770 billion in Pentagon spending, in a 45–51 vote. The NDAA sets policy for the Pentagon on a number of areas including how many rifles and ships it should purchase, soldiers’ salaries, and to how best to approach geopolitical threats.

The House’s version, approved months ago, directs defense and intelligence officials to detail how to protect Afghanistan against potential terrorist threats, now that the United States no longer has a presence in the country.

The Senate’s version of the defense policy bill for fiscal year 2022 was introduced by Sens. Jack Reed (D-R.I.), the chairman of the Armed Services Committee, and Jim Inhofe (R-Okla.), the ranking Republican committee member, in September.

Senate Majority Leader Chuck Schumer (D-N.Y.) on Dec. 1 said he would ask Rubio to “sleep” on his decision overnight.

“It makes no sense. No sense whatsoever,” Schumer said. “How does it help Senator Rubio’s goal with the Uyghurs by preventing anything from moving forward unless his proposal gets in the bill, which would destroy the bill? That’s the absurd place we are in tonight.”

He added: “It is regrettable. It is sad … and it speaks to the need to restore the Senate and change the rules.”