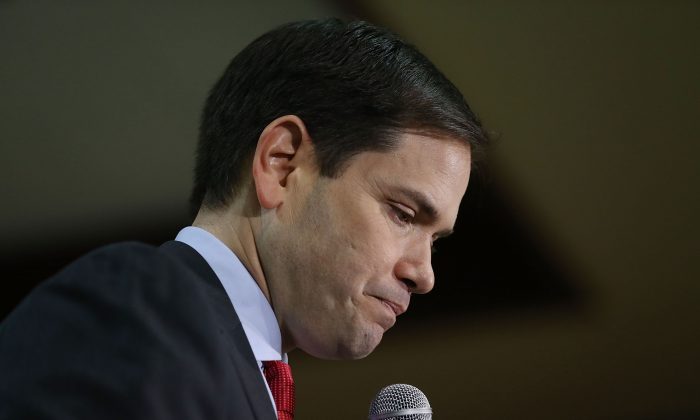 Early ballots are to blame
By Steven Klett
biggersmaller
Print

At the March 22nd Republican primary in Arizona, Marco Rubio got more than 70,000 votes despite having dropped out a week earlier.

Rubio’s votes accounted for about 13 percent of the total ballots cast.

Rubio’s votes accounted for about 13 percent of the total ballots cast. That’s 3 percent or 18,000 more votes than Ohio Governor John Kasich, who came in third in the race.

The reason? Arizona’s early voting policy started the voting process on Feb. 24, and as of March 15 (the day that Rubio suspended his campaign), there were already 309,620 votes.

By election day, early voting accounted for 31 percent of the Republican voters.

Arizona, like Florida, is a state with a large number of retirement homes and communities with voters that require early ballots.

By election day, early voting accounted for 31 percent of the Republican voters.

Donald Trump easily won all of the state’s 58 delegates with 42 percent of the vote compared to Ted Cruz’s 24 percent. Arizona is a winner-takes-all state.

Ben Carson, who dropped out March 4, also received more than 13,000 votes, according to ABC.

Related Coverage
Marco Rubio: I Look Forward to Life as a ‘Private Citizen’

Even if the votes for Carson and Rubio were allotted to second place finisher Ted Cruz, the state would still have gone to Donald Trump, though the race would have been closer.