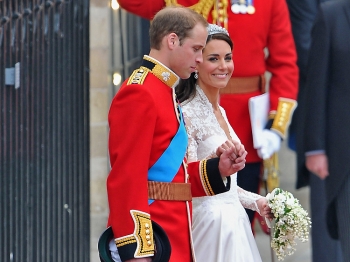 Just two hours away from the big event.

At 11 a.m. local time on Friday, the royal wedding of Prince William and Catherine Middleton at Westminster Abbey will mark the biggest nuptials since Prince Charles and Princess Diana’s wedding in 1981.

After Prince William, 28, and Middleton, 29, tie the knot, they will become the Duke and Duchess of Cambridge.

50 million British pounds were earned in revenue from royal merchandise

$34 million is the estimated cost of the wedding

1.1 million tourists are expected to visit London just for the nuptials

750,000 “limited edition” commemorative Oyster cards have been produced by Transport for London

600,000 fans are estimated to line the carriage procession streets from Westminster Abbey to Buckingham Palace

28,000 wilted tulips were cut down in front of Buckingham Palace. Warm weather had caused the flowers to bloom prematurely.

10,000 flowers will be decorating Buckingham Palace and Westminster Abbey

10,000 hot and cold canapés will be offered to guests at Queen Elizabeth II’s lunch reception following the ceremony

8,000 security cameras will be keeping watch at the ceremony

5,500 street parties are estimated to take place throughout the United Kingdom in celebration of the wedding

5,000 police officers will stay on duty in London to deal with potential threats ranging from terrorist, anarchists, and stalkers.

2,200 is the capacity of Westminster Abbey

1,900 guests are invited to the Westminster Abbey service

700-year-old is the age of Westminster Abbey

300 guests are invited to the dinner hosted by Prince Charles

140 tons of waste is expected to be collected along the procession’s route.

75 minutes will be the duration of the royal wedding service

50 members of the royal family who will be in attendance

40 foreign royals who have been invited to the wedding

29, the age of Middleton, who is the oldest (non-divorced) bride to ever marry into the royal family

28, the age of Prince William

28 pages are in the official wedding program

18 carats, the weight of Middleton’s sapphire engagement ring, which once belonged to the late Princess Diana

9 words, the length of Middleton’s new title: Her Royal Highness (HRH) the Princess William of Wales

9 years, the length of the royal couple’s relationship, which started at the University of St. Andrews in 2001 when they were schoolmates

6 figures, the sum reportedly contributed to the royal wedding by Middleton’s parents Carole and Michael