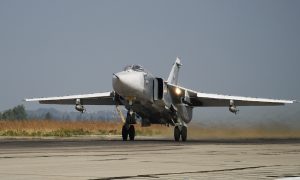 Russia Shows Military Might in Syria Ahead of Peace Talks
0 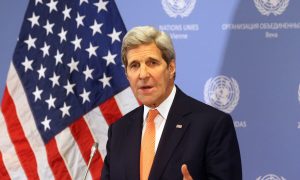 Former Royal Dutch army soldier Jitse Akse traveled to Syria last year to join Kurdish rebels in their fight against ISIS. He says he decided to leave for Syria after ISIS terrorists laid siege on the Syrian-Turkish border town of Kobani, leaving Kurdish fighters scrambling to keep control of the town.

Akse had served with an elite force in the Dutch army, specialized in rapid air deployment, which he joined when he was 17 in 1986. In an interview with Dutch newspaper Leeuwarder Courant, Akse said that he killed ISIS fighters as a sniper in Syria. Asked how many ISIS troops he killed, he said “I’d rather don’t say that,” but when asked if it was more than two he said “yes.”

Akse’s reluctance to specify how many ISIS fighters he killed was because he was well aware of the potential risks he faces now that he’s back in The Netherlands. His fears were well-founded, as he was soon arrested at gunpoint by Dutch police, who put a bag over his head and took him away on Jan. 13.

He now faces murder charges for the ISIS terrorists he killed in Syria. Prosecutors are using the very public statements Akse wrote on his Facebook account about why he joined the fight against ISIS, as well as statements made by Akse in Dutch media acknowledging that he had killed.

Under Dutch law, use of force is only justified in rare cases of self-defense.

Under Dutch law, use of force is only justified in rare cases of self-defense. Even though The Netherlands is providing military support for a U.S. led coalition against ISIS, when it comes to its civilians, it’s a different matter.

“A Dutch citizen is not allowed to go join a war on his own initiative, and commit crimes there,” public prosecutor Jirko Patist told regional TV channel Omroep Gelderland.

Akse was released after handing over his passport pending a police investigation. He is currently hiding in an undisclosed location, as it is not only the Dutch justice system he has to worry about. ISIS loyalists may be seeking to kill him in revenge.

In the interview with Leeuwarder Courant, Akse said that joined the army because his father and several of his uncles had also served. During his time in the army he was deployed in former Yugoslavia where Dutch troops were deployed as part of a U.N. peacekeeping force.

After his contract ended in the army, Akse said he never completely found his way back in society as a civilian. “Civil society is not my world,” he said.

In the interview Akse acknowledged that the opportunity to go back to the frontline brought a long-sought tension back in his life.

Fighting Alongside the Kurds

After being recruited by Kurdish fighters through Facebook, and receiving some training, Akse became part of a unit of about 50 Kurdish fighters, part of the volunteer Kurdish People’s Protection Units.

Akse learned how to use Russian weapons, and became adept at using the Russian Dragunov sniper rifle. In the interview he says he could fire accurately with the rifle for a range of 1300 meters (4265 foot). He was often stationed in a water-tower from which he targeted the ISIS fighters, earning him the nickname ‘The Dutch Falcon of Rojava.’

Akse’s intention when returning to The Netherlands was to stay there for a few weeks, after which he was planning to go back to join the Kurds in their fight. On his Facebook account, which has seen numerous well-wishes and messages of support by Akse’s friends, veterans, and those supporting his cause, Akse asked for donations for equipment he needed such as a rifle-scope and an ammunition magazine pouch.

For now, though, Akse will not be returning to Syria anytime soon, as the police investigation is ongoing.

Since Akse’s arrest earlier this month, there has been an outpour of public support on social media. A petition to support Akse has received nearly 63,000 signatures. Comments accompanying the petition are describing Akse as hero, such as: “The world needs more heroes like Akse,” “This man deserves a medal,” and “Justive for Jitse.”

A Facebook page in support of the Dutch veteran has been liked by over 24,000 people.