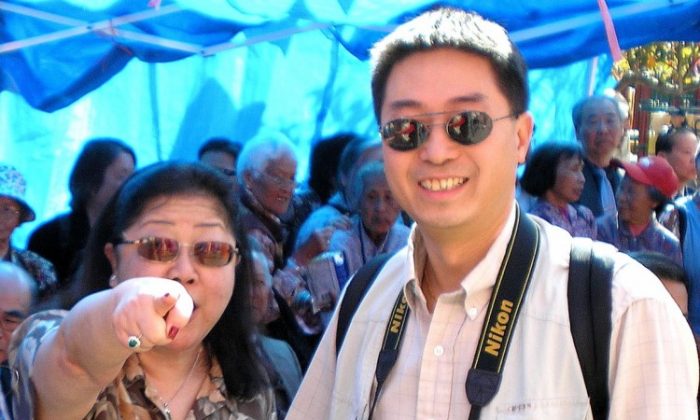 Rose Pak points to the photographer and yells, at Portsmouth Square in San Francisco's Chinatown in 2006. She was attending a flag-raising ceremony for the Chinese Communist Party. (Genevieve Long/The Epoch Times)
China

SAN FRANCISCO—Rose Pak had more in mind than a light Thai dinner when she walked into the now-shuttered Bong Su restaurant, with David Chiu in tow, on 3rd and Folsom in March 2009.

Harlan Kelly, her old friend who is assistant general manager for infrastructure of the San Francisco Public Utilities Commission, was waiting for the pair. Pak had been Chiu’s date for the first few months of his time as Supervisor of District 3.

At Bong Su that night it was a rendition of “Getting to Know You,” Rose Pak-style.

She introduced the two of them, highlighting how wonderful it was that Chiu was a Harvard graduate, and that Kelly was an old friend. Pak had slipped into a black dress for the occasion. Chiu was in his characteristic blue suit. Kelly stuck with shirtsleeves.

Nursing her whiskey after the initial chit-chat, Pak dived into the nitty-gritty of the meeting: Kelly manages billions of dollars in contracts; how might those (nudge, Chiu) be made available not just for the international players, but local contractors, too?

It was left unsaid that “local contractors” meant businesses that could later throw money at Pak’s political projects on call. The conversation didn’t get that far. Chiu wasn’t ready to commit to anything and he had another function to attend, so he excused himself after about 45 minutes, according to an individual sitting at an adjacent table who heard the entire exchange. When asked about the encounter, Chiu said he couldn’t remember clearly. He said that he might have been with Kelly and Pak at a table together at some time.

Rose Pak has been a power broker in San Francisco politics for two decades, but how she acquired that power is something of a mystery. She is not registered to vote, is not a registered lobbyist, and is not reported to receive any remuneration from her sole reported place of employment, the Chinese Chamber of Commerce. Yet friends and foes alike credit her with being someone who gets things done.

“For the people who have gone down that road, it’s very difficult to figure out… what you find is one percent of the iceberg, the other 99 percent nobody can see,” says Aaron Peskin, a former confidant and now political nemesis.

Pak’s influence has waxed and waned across the over two decades she had been involved in city politics. But the trend has always been upward.

She is a short, rotund, loud, and cantankerous woman known for her foul-mouth and frequent drinking and smoking. She also craves attention, and has been comfortable calling elected officials late at night to list her demands: sitting on the balcony of her condo, with a bourbon and a cigarette nestled in her hands, she gets ready to settle into long, late night conversations.

In some cases, the other party gets fed up with it. Former Mayor Art Agnos, for example, whom Pak exercised significant sway over, frequently tried to get off the phone. Pak would portray her suggestions as being in the interest of the mayor or his administration, without suggesting that it was in her interest, according to Larry Bush, former aide to Agnos.

She was most dangerous when trying to exclude members of the Asian community that she did not like, Bush says. “There was a constant intimation of loyalty tests.”

Agnos and Pak later had a falling out over the demolition of the Embarcadero Freeway, which was damaged with the Lomo Prieta earthquake in 1989.

Under Frank Jordan, the mayor from 1991 to 1995, Pak had less influence. Jordan was supported by Pak’s opponents in Chinatown, like Pius Lee. But while she did not have the inside track to the mayor as she did under Brown and does under Ed Lee, she did her best, plying chief of staff Jim Wunderman, for example, with an all-expenses paid trip to China.

Pak’s influence hit the stratosphere when Willie Brown became mayor. Brown and Pak had been good friends since at least the early 1980s, and shared a close relationship with a similar outlook: essentially, that political power is meant to benefit the friends of the victor.

In Gavin Newsom’s term beginning in 2004, Pak was on the outside again. Newsom, with national political ambitions and a war chest filled with old money from the Getty family, had no time for a backroom dealer from Chinatown. He was notorious for ignoring her phone calls.

Pak still made sure she still had her people on key commissions, and she raised money to help elect progressives to the Board of Supervisors, which gave her sway.

Pak will be looking at a thorough political renaissance with a full-term Lee administration.

She also paints a picture with two brushes, as the Chinese saying goes. While Pak is manipulating commission seats, funneling money into political campaigns, and having ceaseless meetings with city officials, she also carries on a long-term relationship with the Communist Party of China.

And there is often some overlap between the two.

The list of names on a typical China junket organized by Rose Pak can end up being a roadmap to influence and patronage. In a late 2007 trip, for example, there was Ringo Wong, a former president of the Chinese chamber of Commerce, donor to the “Run Ed Run” campaign, and a man whom Pak helped get a restaurant concession in the international airport terminal; Robert C. Chiang, a builder so “flagrantly incompetent” for the public projects he has been awarded that he has cost the city millions of dollars, according to the SF Weekly, whom Pak has protected for years; Harlan Kelly, another Pak loyalist who has helped steer contracts to Pak’s friends and protected them when problems arose with their work (like with Chiang); Tilly Tsang, current or former board member of the Chinese Chamber of Commerce; Simon Snellgrove, who heads the development of the waterfront project “8 Washington,” which will be one of San Francisco’s most expensive destinations when completed; P.J. Johnston, who was Mayor Brown’s press man and now works for Simon Snellgrove; Johnston’s wife Karin, who works for Snellgrove’s lobbying firm, HMS Associates, whose head, Marcia Smolens, is good friends with Pak; Shih-Wei Lu, a former World Journal reporter who became Lee’s spokesperson almost as soon as he became interim mayor; Kinson Wong, owner of the R&G Lounge in Chinatown, which is a Pak-preferred haunt; David Lem, a contractor who was helped by Pak and Brown in getting a contract to rebuild the Asian art museum; and Louis Goudeau, former staffer in the Mayor’s Office of Protocol and a Brown loyalist.

Each has their own story with a Pak twist. Pak was helpful in pushing Snellgrove’s 8 Washington project through, according to several people who saw it play out.

Along with advancing the interests of the project in City Hall, Pak also had the Chinatown Community Development Center withdraw from a coalition of local groups that were opposed to it, according to attorney/author Phil Ryan, who for twenty years was a legal associate of Willie Brown. Ryan was on the Golden Gate Tenants Association when he witnessed Pak’s machinations. “It really showed her muscle,” he said.

P.J. Johnson, spokesman for Pacific Waterfront Partners, said he did not know all the lobbyists on the project, and downplayed its significance by describing it as “our tiny project.”

Chiang is another case of a friend getting a good deal. His friendship with Pak helped him keep his job when his work on the Martin Luther King pool project spiraled out of control. The project had a perfectionist architect, Harry Overstreet, who required a monolithic pour of concrete for his design. The first attempt was not up to his standards and it was scrapped, running up the project cost.

In a Department of Public Works meeting about the debacle, someone suggested simply firing Chiang and bringing in the bonding company.

Pak’s blustery manner has made her friends and enemies.

“She is good at the theater of politics,” Peskin says. “If I was at dinner or a public event, she would come and sit next to me and make it appear that we were close to one another, even though I had no desire to talk to her.”

He continued: “You’d be at an event and she’d be talking loudly next to you, so everybody could see she was talking to you… it’s a brazen, childish, and immature technique…”

He remembers a commemoration ceremony for September 11, soon after he became a Supervisor. He arrived at the City Hall event and sat up the front, the place reserved for politicos and VIPs. A few minutes later, after the program had begun, Pak turned up and sat next to him. “She proceeds to start talking to me, during the most solemn program, saying things like “look at what DiFi’s [Dianne Feinstein] wearing, where does she get those dress suits…” Daly recalls.

The current mayor, Ed Lee, does not find Pak’s boorishness as bothersome, or perhaps thinks he has no choice. According to David Chiu, Ed Lee told him that Lee only ran for mayor because he was “having trouble saying ‘no’ to Willie Brown and Rose Pak.”

Observers of San Francisco politics worry that if Lee wins the election, it will be open season for, as Aaron Peskin put it, “Ms. Pak and Mr. Brown and the money influences that they represent.”