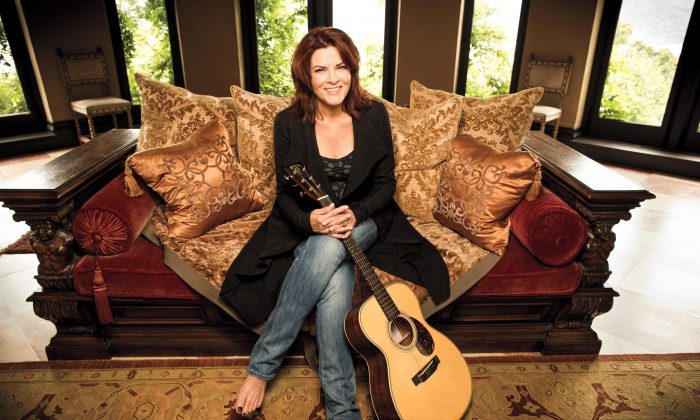 NEW YORK—Rosanne Cash’s latest CD, The River & the Thread (on Blue Note Records) is a journey through the South, a mixture of geographical travels, history, different styles of music, and reflections on relationships, mortality, and religion. The only thing better than listening to the album was seeing her perform it at Town Hall with her husband John Levanthal.

Levanthal cowrote the songs. While Cash wrote most of the poetic lyrics, he supplied most of the music (as well as served as guitarist and producer of the album). Seven other musicians participated.

Cash was in sterling voice and ebullient form as she performed her songs with what she called “the tightest band” she had ever toured with. She told the audience that she had once attended a concert at which Lou Reed had played an entire album straight through, and she wanted to replicate the experience.

Before she sang each song, Cash (who has lived in New York City for the last 20 years) explained its derivation. The genesis of the album was a trip down South when Arkansas State University expressed interest in buying the boyhood home of her late father, the great Johnny Cash.

The Songs
The title comes from the swampy opening track, “A Feather’s Not a Bird.” A seamstress friend who was teaching Cash to sew said, “You have to learn to love the thread.”

“The Sunken Lands” refers to an area in Arkansas where the Cash family lived during the Depression and is a tribute to the singer’s grandmother.

“Etta’s Tune” is about the widow of Marshall Grant, who played bass as a member of the Tennessee Two with Johnny Cash; Etta and Marshall were married for 65 years.

“Modern Blue” is a song about travel (Barcelona, Paris, and Memphis) and love (“I keep my head down/I keep my eyes on you”).

“Tell Heaven” is a gospel song for agnostics while “The Long Way Home” is about acceptance of the past, about moving away and then returning and finding “the woods and the winds now welcome you/to the places you once hid.”

“World of Strange Design” speculates about Jesus coming from Mississippi, and “Night School” takes place in Mobile, Ala., a place that Cash never visited.

Cash and Leventhal were in Memphis when they saw a sign for the city’s first black radio station (where B.B. King was once a DJ) that said “50,000 watts of pure power” and that inspired the song, “50,000 Watts.”

Cash’s ancestors fought on both sides of the Civil War and “When the Master Calls the Roll” is a love story set during that period. It was written by Cash, Leventhal, and Rodney Crowell (Cash’s ex-husband), who sings background on the album version along with Kris Kristofferson, John Prine, and Tony Joe White.

“Money Road” is the bluesy tune that was the result of a visit to the Tallahatchie Bridge (made world famous by Bobbie Gentry’s hit “Ode to Billie Joe”), the graves of Emmett Till, and Robert Johnson.

In the second half of the concert, Cash performed songs from her prior albums. With the band, she sang Hank Snow’s “I’m Movin’ On,” Johnny Cash’s “Tennessee Flat Top Box” as well as her own “Blue Moon With Heartache” and “Western Wall.”

With the sole accompaniment of Leventhal on guitar, she delivered haunting renditions of “Ode to Billie Joe” and “The Long Black Veil.” Cash observed that the latter song contains a reference to the “town hall lights.” Also included in the program was the singer’s early hit, the catchy “Seven Year Ache.”

Cash and the band fully deserved the standing ovation at the end of the concert. “The River & the Thread” CD should earn the singer-songwriter another Grammy nomination.

Barry has been a music, theater and travel writer for over a decade for various publications.