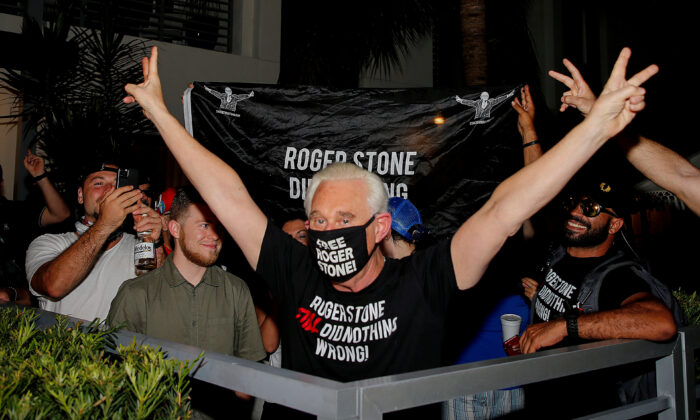 Roger Stone, a longtime friend and adviser of President Donald Trump, reacts after Trump commuted his federal prison sentence, outside his home in Fort Lauderdale, Fla., on July 10, 2020. (Joe Skipper/Reuters)
US News

Roger Stone has announced that he will file a $25 million lawsuit against the Department of Justice (DOJ) while his lawyers file complaints for prosecutorial misconduct against a number of key DOJ officials.

The lawsuit comes just days after he was granted a presidential pardon on Dec. 23 by Donald Trump. He had previously been granted clemency, with his prison time, unpaid fine, and supervised release commuted.

“My lawyers will be filing formal complaints for prosecutorial misconduct’s with DOJ office of professional responsibility at the same time I file a 25 million dollar lawsuit against the DOJ and each of these individuals personally.”

“In fact I am going to add Bill Barr to the lawsuit and I will handle his cross-examination personally,” he added.

Stone, a former political adviser to President Donald Trump, was arrested in January 2019 and sentenced to three years and four months in prison one month later in February.

He’s one of several associates of Trump who faced charges as a result of special counsel Robert Mueller’s investigation into alleged Russian interference in the 2016 presidential election. He was convicted in November 2019 on all seven counts he was charged with, including obstruction, witness tampering, and making false statements to Congress.

The charges (pdf) were related to allegations that Stone had made false statements to the House Intelligence Committee during its probe of alleged Russian interference, and that he attempted to persuade a witness to give false testimony and withhold pertinent information from investigators.

Stone argued the judge in his case “hid exculpatory evidence” from his trial based on redacted sections of the Mueller report, “in which they admitted that they had no evidence whatsoever of my colluding with Russia, WikiLeaks, [or] Julian Assange.”

Trump has been critical of the case against Stone and has voiced concerns on Twitter that Stone, a former political adviser of his, has been treated unfairly.

Trump previously commuted Stone’s sentence earlier this year in July, a day before Stone was due to begin serving a term of three years and four months.

“I have an enormous debt of gratitude to God almighty for giving the president the strength and the courage to recognize that my prosecution was a completely politically motivated witch hunt and my trial was a Soviet-style show trial,” Stone said Wednesday night after being granted his pardon.

Trump granted the pardons shortly after arriving in Palm Beach, Florida, for the holiday season. They mark the second wave of clemency actions in the last two days, and brings the number of people Trump has pardoned or commuted sentences for to 49.

The Department of Justice declined to comment on the lawsuit.