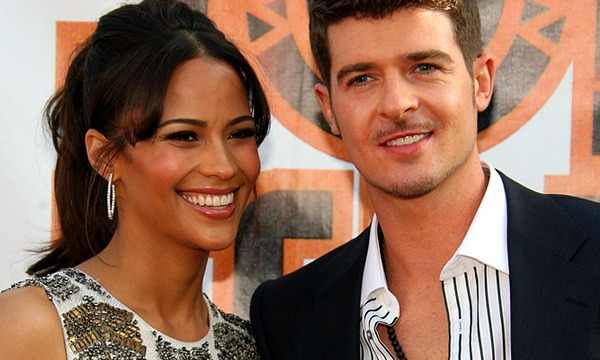 The Happy Couple. Was The Split Fashioned To Keep Paula's Name In Press?
News

Robin Thicke and Paula Patton: Is Their Split a Publicity Stunt???

OKAY.  Some say it all started with the Miley Cyrus VMA twerking sexcapade.  All of that rubbing against Robin Thicke’s body. Seriously?  I highly doubt the “stage presentation” (yes that’s what it was – no more or no less!) with Cyrus rattled the sensibilities of Paula Patton one iota.  If anything we the viewing public, need to make ourselves more aware of what took place during Miley’s raunchy stage performance.

One:  Miley did not produce the performance. Poor girl.  Someone else did.  This came from the mind of industry producers.  Miley and Thicke did exactly as they were told.   Moreover, all of the shenanigans came from Cyrus and not Thicke.

Two:  Since this is show business, that performance rolled off of Patton’s back just as she expressed some time afterward in quite a number of live and press interviews.  It was no different than Paula being wrapped in a passionate embrace with some on-screen hottie the likes of Denzel Washington.  Folks.. this is “show” business.

Three:  Paula knows that her husband’s on stage image is based on his sex appeal.  Robin’s hip grinding in front of screaming women on stage is nothing new.

So, moving right along.  The next reported infraction took place when Thicke was photographed with a female fan.  A mirror behind the twosome revealed that he was grabbing her rear-end.  Well, while not at all very tasteful,  this isn’t grounds for divorce.  If Patton is indeed going to divorce Thicke it will be for matters far more profound than this incident.  The fact of the matter is there has been no known report of Thicke having an actual affair with anyone.  I’m  not saying that he hasn’t had an affair, or hasn’t bedded any of the women who surely seek him out while on the road.  I’m just saying there is no report of such an occurrence.

Suddenly, out of the blue the entertainment presses blow up with the report that Paula Patton has split from Thicke due to his bad-boy conduct. Bad boy conduct?  Certainly there’s got to be a more definitive reason than this.  For a number of weeks prior we’d all been watching Patton support her husband and note the exact same thing that I’m noting in this blog.  The twerking was no big deal, and that she and Thicke have a solid relationship.   Now of course she could have lied, but my point is that we may need to examine the possibility that she wasn’t lying.    Patton indeed asserted over and over again she was not rattled in the least by any show business shenanigans, and there were no reports of infidelity.

From this I deduct two things.  There has either been affairs that have not come in to public light, or that the Robin Thicke and Paula Patton split is a farce. Now I’m not definitively saying the split is a publicity stunt, I’m only tossing the possibility around in my head.

Here’s why. Let’s back a up a bit.  Robin Thicke’s career has been on fire.  He garnered the top song of 2013 with his controversial  hit Blurred Lines.  Heck, even I have to admit how much I enjoyed dancing to this hit song and was even left tickled by some of the words.

Okay, I digress.   While Robin probably had more publicity than he could ever desire, the opposite was actually true for Patton.  I’m not putting her down.  I’m a Patton fan.  But the truth of the matter is that I’ve never heard or seen Paula Patton’s name in print as often as I do now (since the split).    I must be honest and note that Patton’s name wasn’t burning up the pages or blog of any publication in print or on line. Even now when you see her name, for the most part it’s associated with her split from Thicke.

Moreover, Thicke has fashioned rock concerts and even an album from this highly-publicized split.  TMZ published a report last week about Paul Patton making the split final.  But you had to read the report very carefully.  One aspect of this split remains evident.  Paula Patton has not filed divorce papers nor has even sought a lawyer – which was cited at the very end of that sensationalistic TMZ report.

So while no official divorce is evident, one thing is indeed evident.  I’ve never seen Paul Patton’s name in the press as much as I am seeing it now.  That’s my story and I’m sticking to it.