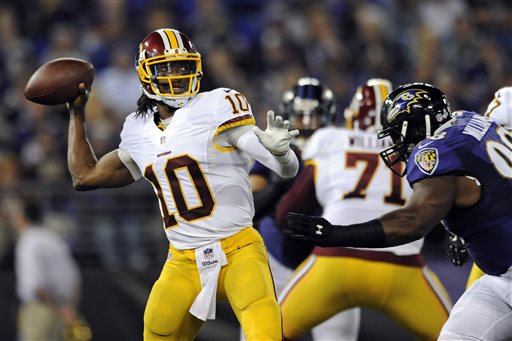 Washington Redskins quarterback Robert Griffin III, (10) throws to a receiver as he is pressured by Baltimore Ravens defensive tackle Brandon Williams in the first half of an NFL preseason football game, Saturday, Aug. 23, 2014, in Baltimore. (AP Photo/Gail Burton)
Life & Tradition

Robert Griffin III, the Washington Redskins quarterback, talked about his relationship with his wife this week.

He’s due to start Sunday against the Houston Texas and 1 p.m. on Sunday.

Speaking with the Washington Post, Griffin recalled his proposal to Rebecca Liddicoat at Baylor.

“The image of a football player is a tough guy that never cries, that eats meat, picks up barrels of hay and lifts them all the time,” Griffin said. “That’s just not who I am and I’m not afraid to express that.”

Griffin also touched on interracial marriages, as his wife is white.

“We’ve certainly made progress, but I’m an analytical guy and I know there are still people that have issues with interracial marriages and that’s just what it is,” Griffin said.

He added: “We had to deal with it, not necessarily at Baylor, but any time you walk around and people give you funny looks, you understand that some people aren’t going to agree with it, whether it be in the white community or the black community. We understood that when we decided to get married and have that relationship, and we’re willing to deal with it. It’s not as prevalent an issue as Doc [Rivers] or Charlie [Strong] had to deal with, so I think in that regard we have moved on, but I think more so it’s hidden in today’s society.”

He continued that ” if you look at some of the bad things that are said on social media about different people, myself included — you can see the racial undertones of everything that’s being said, and when people can hide behind something, they’re a whole lot more willing to say things that won’t be traced back to them, but can it can still kind of show you that backdrop to America’s still having to deal with and go through to this day. I try not to judge anybody and then hopefully they don’t judge me for the fact that I decided to have a white wife.”