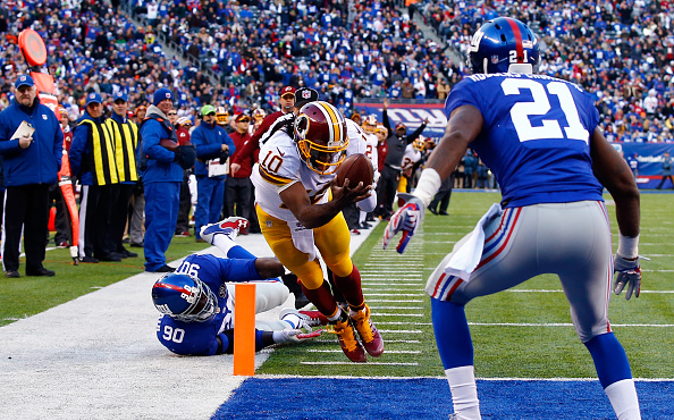 EAST RUTHERFORD, NJ - DECEMBER 14: Robert Griffin III #10 of the Washington Redskins fumbles the ball out of bounds in End Zone in the second quarter against the New York Giants during their game at MetLife Stadium on December 14, 2014 in East Rutherford, New Jersey. (Photo by Al Bello/Getty Images)
NFL

Due to a neck injury to quarterback Colt McCoy, Robert Griffin III has once again taken the reins at the quarterback position for the Washington Redskins.

just put on the @RGIII jersey…heres to one last shot

The backup Subway cashier has entered the game. #WASvsNYG

RGIII in at QB for Washington. Jay Gruden looks less than thrilled pic.twitter.com/axgyt2K6HH

Now as it turns out, RBIII started the game on a roll, completing a perfect six out of six passes for 75 yards and a touchdown. And indeed, it looks like there’s nothing like scoring to smooth things over.

All Smiles and laughs between RG3 & Gruden on the sidelines. Haha. Nothing like scoring to smooth things over. #BFF #WASvsNYG

Please let there be more moments like this in @RGIII‘s future. #HTTR pic.twitter.com/tgqO3LVz5g

refreshing to see the smile again (and the touchdown) @RGIII #NFL

However on RGIII’s second drive in what can be interpreted as a “final chance game”, he went back to his old ways by throwing a three and out. So naturally, skepticism reemerged.

I know I’m like 14 weeks late to this, but RGIII’s refusal to throw the wide open receivers is stunning

of RGIII gets injured the Redskins will be bringing in their 4th string quarterback, Dave. pic.twitter.com/S7hJDonSrq

But at the end of the half, ironically on a day where all the focus is on fellow Heisman winner Johnny Manziel, RBIII again led his team  to a scoring drive, ending the drive with a brilliant leaping touchdown. #Vintage!!

RGIII flashes back to 2012 with a NICE rushing TD. #WASvsNYG

But wait. That wasn’t a touchdown. The referee reversed the ruling, so instead of a RGIII touchdown, it’s a RBIII fumble.

It’s time to evacuate DC…the place is about to suffer a nuclear meltdown over the @RGIII fumble (.@NFL Correct Call BTW)! #WASvsNYG

Stay tuned to the second half of Redskins-Giants for more RGIII action! At the half it’s 10-7 Redskins.