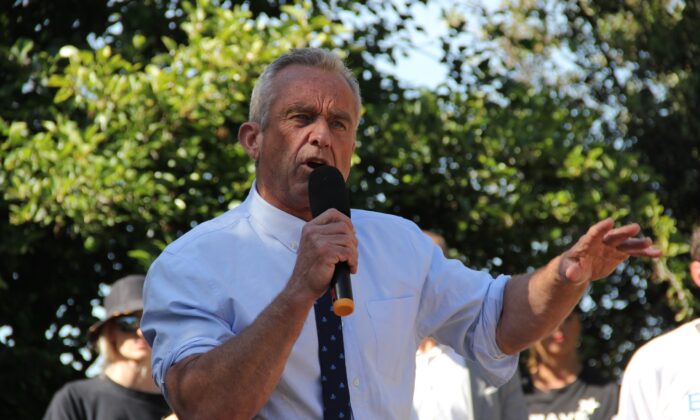 Robert F. Kennedy Jr. speaks at the Humanity Against Censorship rally in front of Meta headquarters in Menlo Park, Calif. on May 19, 2022. (Hao/The Epoch Times)
AMERICA

“One of the things that’s clear from the data [is] that … vaccines—because of the high degree of transmissibility of this virus—don’t protect overly well, as it were, against infection,” Fauci said.

“It’s astonishing that mainstream media allows [Fauci] to blindly make that statement without any effort to hold him accountable for the costly national policies and the lockdowns that were utterly built upon his initial assertion that the vaccines would prevent transmission and end the pandemic,” Kennedy told The Epoch Times.

The lockdowns initially were imposed to flatten the curve in two weeks. Kennedy asserts that they “were contrary to every previous advisory for pandemic countermeasures by the CDC and the WHO.”

He believes that “the house of cards should be falling” and that the media should be putting pressure on the NIH.

“The national media, which was fooled by all these lies, should be surrounding NIH with pitchforks and torches. And yet it’s like water on a duck,” he said.

Kennedy is the author of the best-selling book “The Real Anthony Fauci,” an encyclopedic work that encompasses Big Pharma’s meddling in public health and people’s liberties.

“If they don’t prevent transmission, then how does he justify the mandates? Particularly for children?”

The Epoch Times reached out to Fauci’s office for comment.