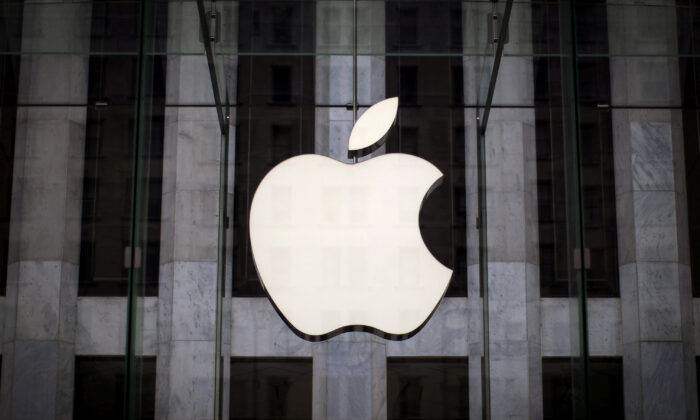 An Apple logo hangs above the entrance to the Apple store on 5th Avenue in the Manhattan borough of New York City on July 21, 2015. (Mike Segar/Reuters)
Crime and Incidents

Robbers Hit California Apple Store, Make Off With $20,000 Worth Of Items

A San Francisco-area Apple store was targeted Wednesday by robbers and looters in broad daylight, resulting in thousands of dollars in losses.

They said the “brazen daytime burglary” occurred in front of staff and customers, with thieves stealing $20,000 in goods from the store. They then fled the scene in a vehicle, officials said.

The Santa Rosa Police Department released photos of the suspects, who were described as “four young, Black males between 14 and 18 years old” and who were “wearing mostly black clothing with masks covering their faces.” No details about the vehicles released.

Earlier this week, thieves and looters targeted several other locations in the Bay Area, including a Louis Vuitton store, a Nordstrom, pharmacies, cannabis dispensaries, and a jewelry store. Looting incidents were also reported in Los Angeles, including a Nordstrom in the city.

The spate of robberies started Friday night, just hours after Kyle Rittenhouse was acquitted of murder charges. Protests were held across several U.S. cities, although police in Oakland and Walnut Creek have said the robberies are not connected with protests.

In response, Gov. Gavin Newsom said he authorized the creation of task forces to tackle the rise in such crimes.

“I have no sympathy, no empathy whatsoever for people smashing and grabbing, stealing people’s items, creating havoc and terror on our streets,” the governor told reporters earlier this week.

Several years ago, California passed Proposition 47, which reclassified felony theft under $950 as a misdemeanor. Some police groups have said that the law, as well as new bail reform rules, have led to a spike in crime nationwide.

“As a Democrat, I believe in criminal justice reform. There are inequities in our system where we need to create a justice system for all,” California Sen. Melissa Hurtado, a Democrat, told the Washington Examiner. “However, we have gone too far. The state of California has been doing it wrong. It needs to change.”

Anyone with information related to the theft should call the Santa Rosa Police Property Crimes Investigations at (707) 543-3575. Officials didn’t provide other details about the theft.