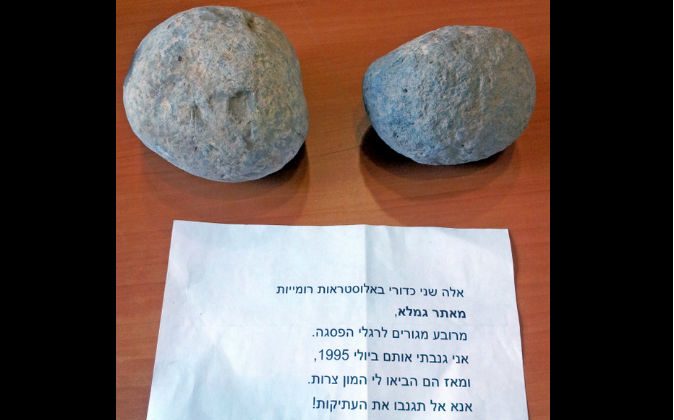 Two ancient Roman artifacts and a note left together at a museum in Be'er Sheva, Israel, in July 2015. (Courtesy of the Israel Antiques Authority)
archaeology

A bag was left in the courtyard of the Museum of Islamic and Near Eastern Cultures in Be’er Sheva, Israel, containing two ancient Roman sling stones.

A note inside declared: “These are two Roman ballista balls from Gamla, from a residential quarter at the foot of the summit. I stole them in July 1995 and since then they have brought me nothing but trouble. Please, do not steal antiquities!”

The Israel Antiquities Authority (IAA) reported on the recovered artifacts in July 2015, and noted it’s not the first time thieves have returned antiquities under such circumstances.

For example, a 2,000-year-old coffin was turned in after the Tel Aviv resident who had it in his bedroom “realized the morbid meaning of the find,” IAA reported.

The stones returned in Be’er Sheva were originally found in the Gamla Nature Reserve. Many ballista stones from the Early Roman period were found there. The Romans shot them at defenders outside the city wall so they could get to the wall with a battering ram.

“The stones were manually chiseled on site by soldiers or prisoners,” said Dr. Danny Syon, who excavated the Gamla site, in a press release.