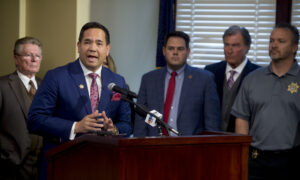 President Donald Trump and his campaign have filed lawsuits in a number of states, looking to stop ballot counting or to get better access to counting centers, among other things.

Some of those lawsuits have succeeded, and others have failed. But Ronna McDaniel, the Republican National Committee chairwoman says they’re sending out reinforcements.

“Today we announce that the RNC has deployed legal teams in four states, including Michigan, to investigate clear irregularities with vote counting and tabulation in those states. They will work with state and local authorities to ensure that a legal count is conducted in accordance to each state’s laws and that every vote is counted.”

In Michigan, where the counting is said to have finished, McDaniel claims that a software issue was found in Antrim County which skewed the results.

Another GOP official said it caused a 6,000-vote swing against their candidates, and that 47 other counties, also used that same program, which could lead to other issues.

Other than Michigan, Trump’s team has filed lawsuits in Pennsylvania, Nevada, and Georgia, where a judge rejected one of their suits that accused a county of improperly counting ballots.

Georgia State Secretary Brad Raffensperger has said there will be a recount.

“As we are closing in on a final count, we can begin to look toward our next steps. With a margin that small, there will be a recount in Georgia.”

Democrats, meanwhile, are pushing back against Trump’s accusations of deliberate election tampering.

Philadelphia Mayor Jim Kenney said “the votes will continue to be counted until every valid mail-in ballot absentee ballot and provisional ballot is counted. So while some, including the president continue to spew baseless, claims of fraud, claims for which his team has not produced one iota of evidence, what we have seen here in Philadelphia is democracy pure and simple.”

In Philadelphia, the Trump campaign filed a lawsuit, asking for better access at ballot counting centers, which was approved.

But Pam Bondi, a Trump campaign associate, accused election officials of violating the judge’s order because they moved the counting machines to the back of the building where they can’t be seen.

An Epoch Times reporter at the Pennsylvania Convention Center saw that poll workers were working far from where the observer barricade was set.

She says that, at that time, she was told that 20,000 ballots still needed to be counted, but that the work was winding down.

Meanwhile, a number of media outlets are pointing to a victory for Democratic nominee Joe Biden.