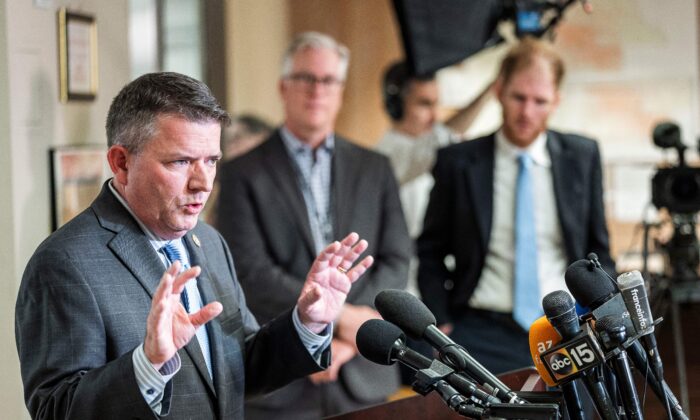 Bill Gates, chair of the Maricopa Board of Supervisors, speaks about voting machine malfunctions at the Maricopa County Tabulation and Elections Center in Phoenix, Ariz., on Nov. 9, 2022. (Olivier Touron/AFP via Getty Images)
By Allan Stein

According to the memo—written by attorney Mark Sonnenklar who summarized the findings of 11 roving attorneys working with the Republican National Committee’s Election Integrity program in Maricopa County—72 of the 115 vote centers the attorneys visited, 62.61 percent, experienced “material problems.”

“It seems very clear that the printer/tabulator failures on election day at 62.61 percent of the vote centers observed by 11 roving attorneys, and the resulting long lines at a majority of vote centers, led to substantial voter suppression,” Sonnenklar wrote.

Nathan Brand, the spokesman for the Republican National Committee (RNC), confirmed that Sonnenklar was a roving attorney working with the committee.

Maricopa County officials confirmed the problems with tabulation equipment on election day, later attributing the problem to printers and stating on Nov. 9 that the issue had affected 30 percent of all voting centers in the county and an estimated 17,000 ballots.

“We are still investigating. The printer settings were the same as the ones we used in the August primary & the paper was the same thickness,” county officials said in the statement.

Before the general election, the county “test-printed and test-tabulated hundreds of ballots without issue.”

Sonnenklar said that the ballot and printer problems caused voters to deposit their ballots either into “box 3,” spoil them for a re-vote, or “get frustrated and leave the vote center without voting.”

In his memo, Sonnenklar disputes claims by county officials that the county had resolved issues by 3 p.m. on election day and that the total impact was “insignificant.”

“Collectively, I and the other 10 roving attorneys also reported that voters had to wait in significant lines at 59 of the 115 vote centers we visited (51.3 percent). In many cases, voters had to wait 1-2 hours before they received a ballot for voting.”

“It is certainly safe to assume that many voters refused to wait in such lines, left the vote center, and did not return to vote later,” he said.

Sonnenklar and several of the attorneys cited in the report directed questions from The Epoch Times to Colton Duncan, spokesman for the Kari Lake for Arizona governor campaign.

The Epoch Times could not reach Duncan for comment.

In a Nov. 21 statement, Bill Gates, chairman of the Maricopa County Board of Supervisors, said that the county had finished counting “all legal ballots” during the election and would hold a public meeting to canvas the election on Nov. 28.

“The canvas required by law is the full accounting of ballots cast,” Gates said. “It’s meant to provide a record of the votes counted and those not legally cast.”

He assured there would be “no delays or games,” and the board would act “according to state law.”

Gates said that at the meeting, the board members would respond to a letter from Arizona Assistant Attorney General Jennifer Wright on behalf of the state’s Election Integrity Unit that requested a full accounting of the election problems.

“Board members received this letter on a Saturday night and had a team working on a response all day Sunday, even as staff continued counting votes,” Gates said.

“We look forward to answering the AG’s questions with transparency as we have done throughout this election.”

As of Nov. 21, Republican Gubernatorial candidate Kari Lake had not conceded the election to Arizona Secretary of State Katie Hobbs and is exploring her legal options. Hobbs’s office did not return a call from The Epoch Times seeking comment on the memo.

On Nov. 21, a Twitter post from “Gov-Elect Katie Hobbs” announced the appointment of Assistant Secretary of State Allie Bones as her chief of staff.

“Over the last 20 years, I’ve worked alongside Allie Bones on everything from ensuring secure elections to providing support for local businesses—and I’m thrilled to announce that Allie will serve as my Chief of Staff,” Hobbs wrote.

“Together, I am confident we will get the job done in Arizona.”